I could, of course, ask the same question as yesterday, but I won’t.

It was a distinctly odd day. Waking up in Quba in the north of the country, I was still full of the peculiarities and wonders of Xinaliq; the hotel I was in could not have been more of a contrast, however.

It was an “Olympic Complex”, incorporating a massive sports training centre as well as a hotel; I idly wondered if it was a remnant of the 1908 games in Moscow when Azerbaijan was still a part of the Soviet Empire to be told, rather sharply I thought, that it had been built in 2005.

Oh well, it was still pretty “Soviety”, with decaying bathrooms, very eccentrically placed lights (perhaps athletes-in-training don’t want to read in bed) and a generally slow feeling about the place.

The food was great, though, as, to my astonishment, was the wine. Well, it wasn’t great, but a bloody site better than the Moldavian stuff I had to endure on my last visit to the region.

And so, off we toddled through a rainy day, can’t complain though, because it had been dry for two months, south to and past Baku to the ancient rock carvings at Qobustan.

And what a site they were; sadly, the rain was a bit of a disincentive to hanging outside for too long, but the carvings that we saw were extraordinary. Up to 10,000 years old, they included a fascinating image of a boat, so similar to the Viking long-boats that Thor Heyerdahl believed there to be a connection between the ancient folks of the Caspian and the Vikings.

Stunning stuff, particularly considering the Caspian Sea is land-locked, but there you are. The resemblance is uncanny. 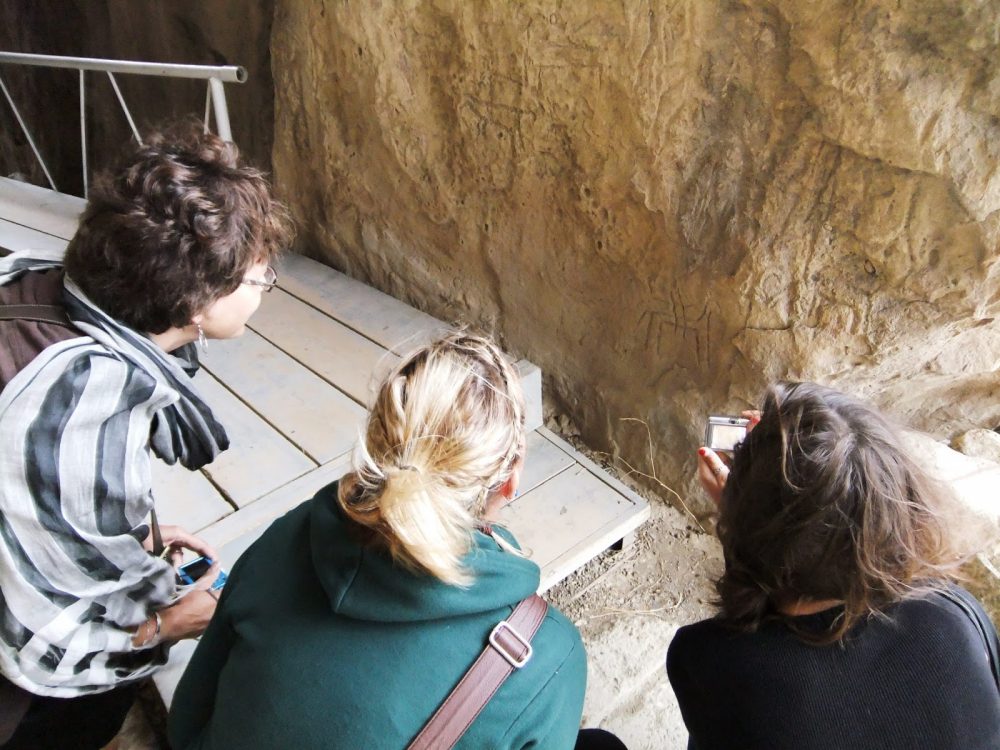 One of the major differences between travelling in “The East” and Europe/North America is the level of protection offered to antiquities. Here, one could, with a bit of a stretch actually touch the carvings; there are few tourists, and really a feeling of actually belonging to the rock artists. It was wonderful, and another reason to return.

Close by are some large pools of bubbling mud, but with the rain intensifying, we thought that watching a thick stew at home might be a reasonable substitute, so we headed back to the city.

An interesting ride it was too … there are beaches here, with resort hotels, umbrellas on the sand and the disarming sight of frolicking bathers with a back drop of giant oil rigs in the bay. There is, at one end of the beach, what can only be described as a parking lot for oil rigs; about eight of the buggers tied up together, waiting for action or repair. And then glancing in the other direction there are half a dozen resorts.

Not exactly the Riviera, but then again, needs must …

And so to dinner, and a fabulous Azeri repast at L’Aperte, recommended by the Lonely Planet book, Dinner, including a couple of bottles of the fine, local beer and another acceptable Azeri wine, with soups, salads, kebabs and all sports was a princely €39 for the two of us . And of that, €20 was for the drink!

Good food, good prices, extremely friendly service, and after a stroll through the Fountain Square area and the gorgeously lit and restored buildings dating from the late 1800s, all was well with the world.

Tomorrow, Zoroastrian temples, hills of everlasting fire and a visit to the National Museum.