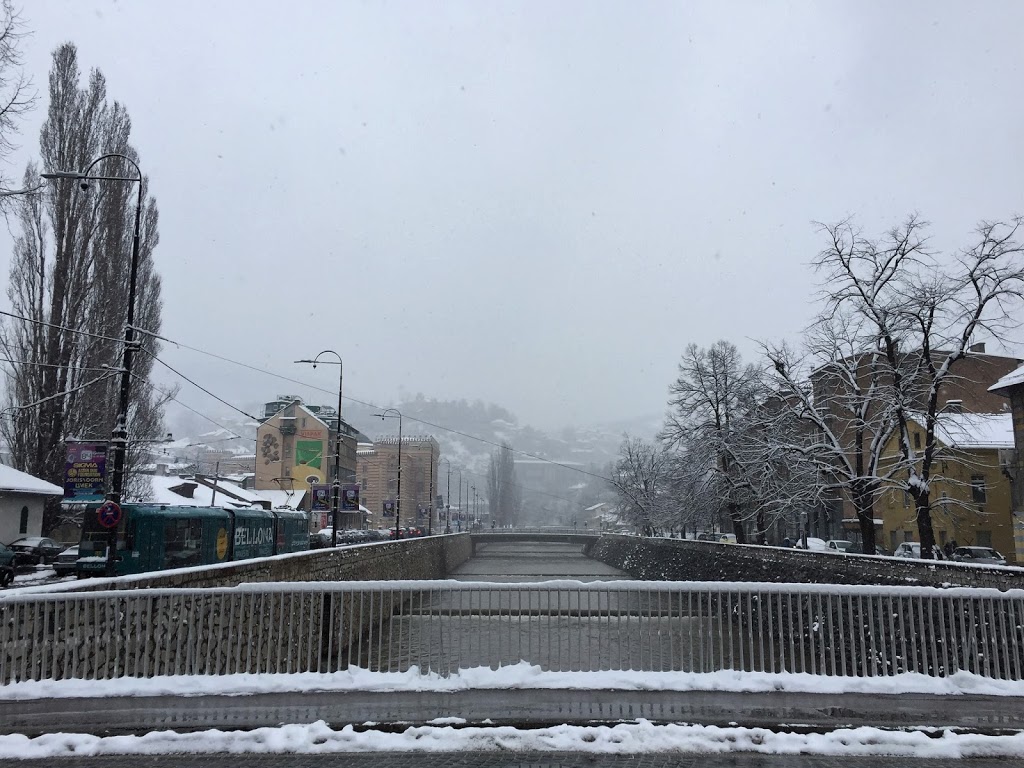 The Central River in Sarajevo

“What can I do in Sarajevo?”, is a question posed by many travellers heading to the Balkans and the answer is that it is a very curious and interesting experience.When there, one is permanently mindful of Narnia, and each time a new looking-glass presents it self, and one clambers ungainly through it, the perspective changes, and with it reality.

There is, of course, no such thing as “reality”, and here as much as any other region in conflict, perspective and perception are the guides to understanding. “The West Balkans”, as Yugoslavia is now considered, are an exercise in perspective.

Sarajevo is a marvellous little city; it is a three-day town, at best, and this dependent on the weather. Previously known in the West as the venue for a long-forgotten Olympic Games in 1984, the capital of Bosnia became the capital of the region’s most intractable country.

It is a fine city to visit; a city of contrast and beauty, and a city that boasts centuries of cultural heritage, scholarship and governance. It is a city to wander; a place of huge historical significance yet overlooked by so many travellers. The assassination of Archduke Ferdinand and the consequential destruction of Europe by the First World War is a local event marked by a small plaque by a small bridge; and this was certainly not its first brush with large-scale war. Sarajevo has been pushed and pulled by both religious and territorial attention for centuries, and the resulting architecture and cultural undercurrents form an engaging backdrop for any casual visitor.

I like Sarajevo; although the central Old Town could be, one imagines, an imitation of a manic Christmas Market during the summer, in the slow season one can still marvel at the streets of jewellers, metal craftsmen and souvenir shops plying for trade in the city’s centre. It is really quite lovely, and the melodic call to prayer, punctuating the day’s routine, only adds to Sarajevo’s mystique and charm.

It is, perhaps, a place to visit rather than live. The comprehensive restoration, the new buildings, roads and rebuilt bridges that have followed the brutal combat of the 1990s belie the underlying culture of Sarajevo. It is a city that is ten miles wide, and an inch deep; it seems to present itself as a veneer. Like much of Bosnia, Sarajevo is suffering from its lost youth. In two senses; both the young lost in the war, and the vanished adolescent years that a post-Communist country needed before diving into the cowboy-capitalism of the early 2000s. From these losses, both in the war and from subsequent migration, the city struggles to keep up.

Amna Turkovic is exactly sort of person that Sarajevo needs to keep. She is, in her mid-twenties, wondering about her home, its future and her own. She is educated, passionately international, passionately Bosnian and deeply proud of her Islamic heritage. She is a musician, a journalist and a thoughtful woman interested in the future. She understands and is profoundly concerned with intolerance and is dismissive of the intensification of religion as Faith transforms into Religion in today’s culture. “It can do no good”, she says, “and can only increase intolerance.”

She speaks of education. She is saddened by how standards are dropping, perhaps a necessary result of losing 150,000 young people to opportunity in the West. She speaks of the importance of the Affricate consonants (the letters c, s, z and d that in Slavic languages can, like a kaleidoscope, change their sounds subtly with only a delicate nudge), the vitality of the “ij” diphthong and other fascinating minutiae of the language. And, while at first it seemed a touch obtuse, her passion for the correct way of communicating spoke volumes, and the importance of accurate interaction in this region was not lost on me.

This is a troubled land. While many of the West Balkan countries have settled into a reverie, Bosnia remains tense. A “nation” of three components that rarely agree on anything is not a stable basis for the future. Yet it needs to become so; Bosnia is a central, and thus critical point of interaction between the peoples, nations, religions and identities of the region. It is a country whose current balance needs to progress and conclude an agreement that will allow some decades of stability and will encourage its young to stay at home and help rebuild the nation.

Because, it is all about the young.

I liked Sarajevo a lot. It is a rather lovely city, I think; my hesitation is only drawn from the weather and my inability to see the spectacular surroundings that drew the Winter Olympics here. It is a city of conversation and of food; it is a place to gaze and think, it is a place of contradiction and hope, and a destination that offers visitors a most remarkable opportunity to see centuries of history and dispute compacted into a passion that I have not met anywhere else on my travels.

It is a city that needs to keep Amna and the thousands of other thoughtful young people who are any community’s future.

Above all, it is a city that must remember to forget, and to forget to remember.