Turkmenistan: 5 extraordinary days in Ashgabat, Merv and the Karakum

Turkmenistan: A Journey Through the Looking Glass

Getting a visa to visit Turkmenistan is not difficult, but can be a little expensive. There are several types of visa, but each has to be obtained through an official tour agency, of which there are many.

I used DN Tours in Ashgabat. They were quick, responsive and made the whole process very straightforward. The only drawback is a reluctance to use the more inexpensive hotels, but as it turned out, that was not an issue.

The visa formalities allowed me to have the label put into my passport upon arrival in Ashgabat. A very simple and efficient process.

I was prepared to be surprised, but Ashgabat is really something else. The capital of Turkmenistan has been described in many ways, but “the offspring from a relationship between Iran and Disney” seemed most appropriate.

It is new and shiny; huge buildings, grand squares, monuments and lots and lots of lights. Particularly purple for some reason or other.

Part of the newness is simply showing off, and part a result of a particularly deadly earthquake that struck the city in 1948. Over 135,000 of the population of 185,000 died making it one of the deadliest quakes in history.

Now about 2 million Turkmen live in the city, and it has evolved rapidly.

Today, massive amounts of money are being poured into tourism. My hotel, the curious Sport Hotel, was a good example. It is quite luxurious, and has 396 rooms. While I was there, there were eight occupied, apparently a fairly normal circumstance.

It had been full once in its two years, I was told, for the Central Asian Junior Wrestling championships held within a month of its opening.

Turkmen are extremely proud of their country, and are quick (as was my guide within an hour of arriving) to tell of the many entries in the Guinness Book of World Records. It is worth noting some them here because I had no idea that these categories existed, and possibly you don’t either:

It is also a city where the previous president (before the incumbent Gurbanguly Berdimuhamedow) had a statue of himself constructed on top of the Neutrality Monument (246’ tall) covered with gold plate, and permanently rotating to face the sun.

This seemed a little over the top to the current president who had the arch dismantled and moved to the suburbs.

All this seems unusual, but curiously, after a couple of days, Ashgabat seems normal. Dinner at a local restaurant with the affable director of the tour company was delightful; people were friendly, and after a surprisingly short time, the city’s extravagances seemed almost normal.

There really are a lot of monuments. Large ones, smallish ones, wet ones and dry ones. Monuments generally to peace, sporting achievement or Turkmen grandeur. And, of course, there were carpets. Including one that is apparently world’s largest (3,239 square feet).

Driving in Ashgabat is peculiar. There is an “old” part of town, but it is in no way historical. The buildings are shabbier, but there is still not much history on display, 19th century at best, and late 19th at that.

Imagine, if you will, a city that lies at the foot of a mountain range that separates it from Iran and forces an elongated shape. From a small centre, centered close to the main mosque, lie a series of small and interlocked streets.

Beyond this central core, comprising of the 2nd, 3rd, 5th and 6th “Microdistricts” lie the succession of ring roads.

I never could find the 1st or 4th of these districts, and for observation only, there were an 8th, a 10th and an 11th Microdistrict, but the 7th and 9th were invisible to the naked eye.

The ring roads enclosed ever more enthusiastic monuments and government buildings. Massive parks, huge hotels and perfectly cambered roads lie everywhere, the result of a combination of a passionate and fervent city planner and barrels of oils and gas money.

This is best illustrated by the fortunes of their currency, the Turkmen Manat. More colourful than useful, the official rate of exchange was about 3.5 Manat to US$1. Unofficially, a single greenback would generate 18 Manat, a significant, if dangerous difference.

Dealing in anything other than Manat in the country is illegal, and changing money unofficially is far less open than in Uzbekistan or Tajikistan.

One of my guides denied that such a parallel market existed, however, in order to purchase both a haircut and a carpet (in different emporia) without requiring an overdraft, I ventured to the Dark Side to exchange my money.

There is, it must be said, remarkably little to spend money on. Other than carpets and haircuts; and a series of rather tacky but necessary souvenirs. Restaurants were plentiful, but the requirement to purchase fully inclusive packages to get the visa makes this a little redundant.

Not that the restaurants were redundant. I ate well and cheerfully with my companion guide, who proved to be a most interesting and genial host. A fine man who explained many of the mysteries of this hermit kingdom.

Ashgabat is only half of the story.

Turkmenistan is a huge country. Mostly empty, and of little interest to visitors, but with pockets of fascinating and beguiling appeal.

We drive some 400 kms from the capital to Mary, a city of about 130,000 lying on an oasis in the Karakum Desert. It is a fine city: mosques and government buildings, of course, but also delightful old streets, quiet leafy areas and people wandering around. 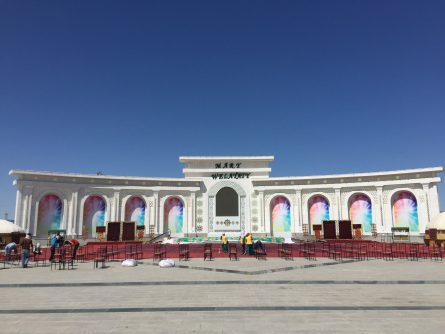 Ashgabat’s layout discourages individual wandering, but the older towns and cities were alive. National dress was more obvious than in many places, and not reserved for events; markets and funfairs were in evidence, and the spirit of the community livelier and animated.

It was, in one evaluation, a Soviet city with Toyotas.

I am in awe of the Toyota sales machine. Wherever I go in the more obscure world, Toyotas abound. They are everywhere, and although I cannot fathom how they have managed to sell vehicles in such numbers to people with such flimsy currencies, they have cracked that problem, and good luck to them.

I was in Mary for a reason, and that reason is the ruins at Merv.

Based around the Mausoleum of Soltan Sanjar, whose full name I was instructed was Muizz ad-Dunya wa ad-Din Adud ad-Dawlah Abul-Harith Ahmad Sanjar ibn Malik-Shah, was born in 1085 and lived to be 72 years old. This, given his extraordinarily full life, was astonishing. 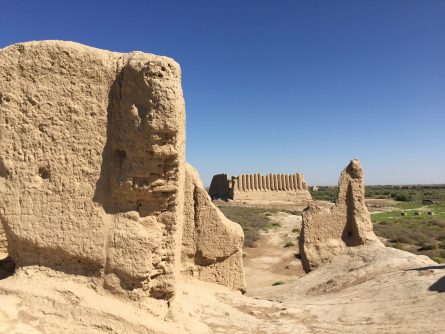 The comings and goings of the Sanjars and the Seljuks, and the other minutiae of the 12th century were delivered at length but with little enthusiasm while I contented myself in the sun, whisking flies and letting my imagination wander.

It is a fine sight; the dry desert air has protected the buildings as well as can be expected. Many were in much better nick than the more recent Soviet buildings in Mary, and there were several keen groups of visitors inspecting most nooks and crannies.

The centre is most certainly worth a visit, as, indeed is the long drive across the desert.

Deserts are actually very interesting. Although at first glance they are less animated than, say, Paris, as ones’ eyes accustom themselves to the light and the strong wind patterns in the sand, and as periodic nomadic people wander past, the whole biosphere of the land comes into focus.

These arid expanses are home to a surprising number of peoples. From Western Sahara on the Atlantic to the Gobi Desert in Mongolia, there lies a long swath of arid desert land that is home to a wide and diverse array of peoples.

There really isn’t much in the way of an economy in the desert, but from antiquity the inhabitants have been nomadic pastoralists. The modern oil economy has injected some money to the region and some jobs, but the old ways die hard.

New towns have sprung up, but still groups of Turkmen still roam with their families as they have since the times of the Bronze and even Stone Ages.

Curious towns like Tejen, lying about halfway between Ashgabat and Mary. Built, predictably on an oasis, there are now about 50,000 folks who call Tejen home. Why, I am not quite sure.

It is known for its melon production, and also a sizable narcotics industry, but despite these and some fertilizer factories its charms escaped me.

I really rather liked Turkmenistan. Not in a two-week-holiday sort of way, but in the way of curiosity. Its closeness reminded me a little of North Korea, but really once outside Ashgabat people relaxed more and mingled.

It offers a fabulous insight into a culture as different as one can imagine. From ancient ruins to the ultra modern city, and from the tightly focused aura that overlaid Ashgabat to the wide, open and mystical desert, Turkmenistan was a kaleidoscope of impressions.

Not least of which would have been the world’s “longest single line bicycle parade” (1,995 bicycles) had I been in Ashgabat on June 1st, 2019 when this achievement was accomplished.