I realise that I have a lifestyle that borders on the unusual, and for that I am grateful. I am able to wander, see odd and disparate places, meet fascinating people and gather a treasure trove of useless facts with which I can pepper conversation for months.

March 2014, however, has been exceptional.

It has been a month of flying, North Korea, a stamp auction in Hong Kong and a day in Macau, selling a flat in London, a wine conference and speed tasting in Tbilisi and now a few days of rest in the South of France before the annual onslaught of the local Toques et Clochers festival.

Firstly, a word about the festival; imagine if you will, a small village of (perhaps) 450 souls playing host to a crowd of up to 30,000 for a day of celebration, duck sandwiches and wine. Copious amounts of wine, I might add, not just a child’s portion; enough to make some of the hill-folk loose all inhibitions about playing instruments that look suspiciously like Scooped Out Sheep in public.

The celebration is an annual event, and villages throughout the region that supplies the major winery Sieur d’Arques. Villages bid for the right to host the annual festival in a manner not unlike the competitions to host the World Cup or the Olympics, however with significantly smaller budgets.

The winner will then have a couple of years to raise funds, establish numerous committees, create special weather prayers and wait for the event.

On the day itself, thousands of visitors, almost all of whom are local, will purchase a glass (€5), some tokens for wine (€2/glass and €10/bottle), and then head off into the madding crowd. Wine stalls selling their wares are everywhere, as are musicians, folks selling duck sandwiches and oysters, jugglers, drummers and thousands of folk.

Knee-deep in wine, with laughter rising perceptibly in volume as the afternoon progresses but rarely a smashing glass and never a fight the event continues until the early hours of the morning. 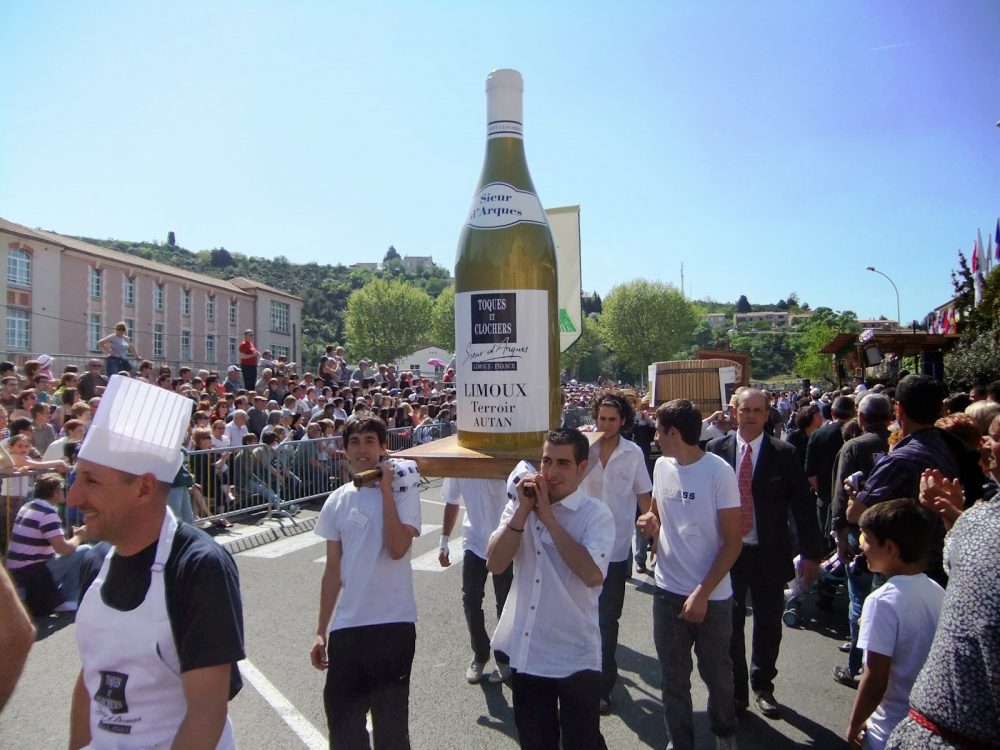 It is impossible to imagine rivers-full of alcohol, glasses and thousands of people in the UK, for example, without conjuring up images of horror, but here in the Languedoc, the festival is charming, well organised, exceptionally amusing and held on the weekend before Easter each year. Make a note in your diaries.

But then again, if Peter Mayle had written a book called A Year in the Languedoc, the economy of the south of France would be completely different. The region, known but unknown, is delightful. The centre of the Cathar religion in the 10thto 12th centuries, it still harbours mysteries and intrigue among devotees of mystery and intrigue!

The Cathars, the Holy Grail, Mary’s escape from the Holy Land, The da Vinci Code, all mixed up with wine, fine food, delightful scenery and not a little story telling.

And so the festival, as far from Pyongyang as I can imagine, starts in four days. It is said in these parts that Don Perignon discovered his wine-making secrets here before moving to Champagne where they figured out how to bottle the stuff without it blowing up.

Fanciful, I imagine, and probably as truthful as the DPRK’s Concrete Wall, but there you go, it is a good story. Nostradamus himself was supposed to have dwelt in a nearby village, but a little prodding of the museum’s curator, and a rather wistful comment of “Well, he might have stayed the night in the village once” comes a touch closer to the truth.

However, it is true that the production of wine is no stranger to these parts.

Livy was recorded as trading non-sparkling wines with the Romans, and the first references to “Blanquette”, or “Small White”, came from the Benedictine Monks who made the first sparkling wines here in 1531. The other white grape of some substantial use here is Mauzac, which along with Chardonnay and Pinot are the grapes from which the delicious local Crement de Limoux is made.

All grist to the mill, and worthy of examination.

It is, perhaps, worth relating a little story about wine sales, and one that perhaps illuminates a great fiction of the world of mega-wine.

For several years, the Limoux winery Sieur d’Arques exported tankers-full of Pinot Noir to Gallo in the US, who sold this far and wide under the Red Bicyclette label. So popular was this concoction that new warehouses were built, and for all I know, special docking facilities for the ever-larger tankers racing this popular brew from the south of France to the US of A.

All was well until a sharp-eyed accountant pointed out that they were in fact selling to Gallo alone, approximately 200% of the annual output of Pinot Noir grapes. Now interestingly, during this period, not a single customer, nor a single Gallo executive or wine taster, questioned the adulteration of their potion by the addition of the cheaper Merlot grape. A small fine was levied discreetly, one would not want this sort of scandal to hit the front pages, Red Bicyclette was relabelled and presumably launched to new heights.