Thirteen kilometres east of Elbow lies a true Saskatchewan surprise: The Smooth 42 Craft Distillery. And it is well worth pulling over to visit.

This the third day of the trip, and yes, I know that Day 2 is yet to be published, was a day for small-town-exploration.

It was a day to look at some of the province’s more esoteric museums, from which there are many to choose. Sadly, the Covidry nature of the expedition meant that many were closed, some even thought to mention this on their website.

One was particularly interesting. Located in a community called Morse, named after the eponymous inventor of the code for some reason that remains elusive, the museum promised to “help visitors ‘remember when’”.

This seemed to be a promising premise for a museum, but alas, it was closed for 2020 to avoid infection.

So we headed northwest toward Riverhurst, a village that promised a trifecta of entertainment. Lake Diefenbaker, a ferry crossing and the F.T. Hill Museum (named after a Mr. Hill, known to his friends as “FT” I was advised).

Mr. Hill was an avid collector of both guns and Indigenous artifacts. The collection, now padded out with some additional rocks and fossils and some antique furniture, seemed to offer hope for an instructive hour. Alas, unknown to us beforehand, the collection was closed, presumably to avoid any potential contagion.

Riverhurst, it should be noted, is not unassuming. It considers itself “The Riviera of the Region”. Really, I don’t know who comes up with these slogans, but… 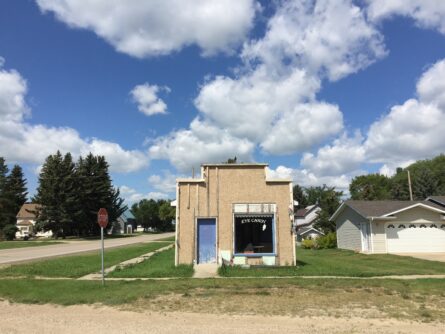 Lake Diefenbaker was delightful; wet and starting to fill with weekenders but not alone worth the detour. The ferry had just departed and would not be back for an hour or more, so we retreated and headed back toward Saskatoon.

All this is to say that our presence at the Smooth 42 Craft Distillery was unexpected by either us or the distillers. It was, however, quite fascinating.

Only two years in operation, the distillery is large and growing. Covid seems to have been a blessing in disguise for them as their staff increased from two part-timers to twenty at the height of the infection. Production, it should be emphasised was not additional vodka for the lock-down, but sanitizers.

Half of their operation was converted to making hand antiseptics, and to meet the demand, two shifts operated daily from 1000 to 1800 and 1800 to 0200. This is a veritable lake of disinfectant, and their production reached a “truck each day”, which for a local operation in rural Saskatchewan is remarkable.

Now the production of “beverage alcohol” has resumed, and their array is terrific. From basic vodka (which I am sure that I will find is not basic at all), they run to flavoured spirits, including a “habanero and garlic” infused vodka allowing for quicker access to the evening Caesar.

It is a fine place, and one that deserves to prosper. Already selling in their local market, pre-Covid they had begun to tackle the daunting paperwork that the Manitoba Liquor authorities require. I hope that they succeed.

Retreating back toward Eyebrow (pop: 119, three churches, a corner grill and a senior centre), we turned north to Elbow.

Lake Diefenbaker (or the South Saskatchewan River, I wasn’t too sure) makes a curious 80˚ turn at Elbow (hence the name), and there, among a pleasant looking golf course lay cottages, and a small community centre. It is home to 300 souls apparently, and a museum.

This arts centre was also firmly shut; a pity, because its showpiece “Buffalo Chair” and “Sod House” would have been worth a few minutes of anybody’s time.

And so, thwarted by a cultural wasteland of closed museums, we turned north and headed toward Saskatoon.

Highways in Saskatchewan are notably straight. The province is well served by roads, and in fact, offers residents and tourist alike over 250,000 kilometres to choose from. It may hold only 2% of Canada’s population, but Saskatchewan has 20% of Canada’s roads to look after.

And in general they do this very well. So well, in fact, that 25 kms of the Chief Whitecap Trail, the “highway” running north to Saskatoon was undergoing some major surgery.

It appeared that the road was to be widened, but puzzling as to exactly why it needed to be twice the size that it is for the very limited amount of traffic that seemed to be using it. Optimism, I suspect, but perhaps if I am able to return in a year or two, I will have the answer.

Saskatchewan does a terrific job at advertising local attractions. They may vary in degree of attraction, but if one is seeking diversion, this terrific province does offer an astonishing array of options.

From Potash Mining Exhibits to Paint Ball, from the glories on display at Gravelbourg (one can only imagine) to the Wolf Willow Winery, one can stop non-stop. We did give the winery a miss.

Fruit Wines may well have their place in the firmament of refreshment, but so 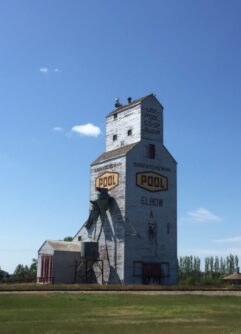 far, fermented rhubarb and berries are not really my cup of tea. I might well be missing something here, but today, we sped past and arrived in Saskatoon, and the glorious Bessborough Hotel.