The  Shosholoza Meyl train is a gentle introduction to private trains!

Private railway travel evokes some rather splendid images; The Orient Express and The Golden Eagle are but two of the companies offering the most luxurious of travel on board their private railway carriages. And wonderful they are too, to which I can attest.

However, the Premier Classe product, on their Shosholoza Meyl train, offered by South African Railways is in a different league altogether, and it is welcome and a most interesting experience.

The operator is Shosholoza Meyl, a division of the Passenger Rail Agency of South Africa. The product is straightforward; passage between Johannesburg and Cape Town or Durban, with each route operating once or twice per week.

The train is elderly; built about eighty years ago and the carriages have been refurbished many, many times. With a little imagination, I think, it is possible to catch a hint of the scent of steam trains, unforgettable for those of us who were around in the Days Of Steam. Today they are comfortable, in the way of an older seaside boarding house, and more than serviceable.

The train is long; seven sleeping carriages each offering accommodation in eight two or four-berth cabins, two dining cars, one bar car and a smoking wagon (at the very back). This seemed a touch over the top for the twenty-one of us that boarded in Johannesburg, but there you are. The train is a set, and all eleven carriages travel together, plus a required and variable number of car-carriers, for a number of passengers use this service instead of driving to the coast.

This operation should not be compared to the Blue Train.

Firstly, the price; passage in/on Premier Classe costs R3,150 (US$250). In comparison, passage on the Blue Train starts at R15,000 ($1,250) in the low season, and R19,000 ($1,500) in the peak. Mind you, the Blue Train starts in Pretoria, thus avoiding the rather dystopian centre of Johannesburg where the Premier Classe originates, and they stop for a glass of sherry at Matjiesfontein on the northbound journey and a quick whizz around the diamond centre at Kimberley on the southbound leg.

The Premier Classe lumbers along.

Shosholoza Meyl, Life on Board

I rather liked it. My cabin was small but perfectly proportioned, the bed comfortable and the linen fresh. The housecoat, which we were admonished to leave behind, let the side down a bit, but was functional. The room was warm, the lighting good and the electrical supply sufficient to keep my phone in action.

The lounge car was pleasant in a dated way. It felt comfortable and familiar, the familiarity that comes with venues of decades of ribaldry and boozing; slightly awkwardly furnished, and too small if the train were full, it would have been a fine place to while away the evening had it been open.

Curiously, it was open as we boarded and were led into the bar car to be offered champagne and a briefing about the trip. It remained open until just prior to dinner, which was served early for some reason, but when we emerged, sated but in need of a night-cap or two at eight o’ clock, it was oddly shuttered.

The food was plentiful, and again, most certainly not The Blue Train, but more than adequate. Three courses at lunch and five in the evening were generous and ample given the lack of recreational space available. The service, it must be said, was generally cheery, although sometimes slightly off key. The wine list was good, with bottles ranging from R80 ($6), but oddly, non served by the glass. Mind you, at those process one could simply order another bottle.

The journey was lovely. Once past the endless, dreary and emphatically-littered suburbs of Johannesburg, and before the same grim outskirts that heralded our approach to Cape Town, thee scenery was lovely, and the light delightful.

The evening rolled along as we passed through endless Savannah, with wispy bushes, the dry ochres of winter and a clear blue sky that gradually melted into sunset. By the next morning we were in hillier country that rose to become snow covered mountains on each flank of the valley through which we rattled along. 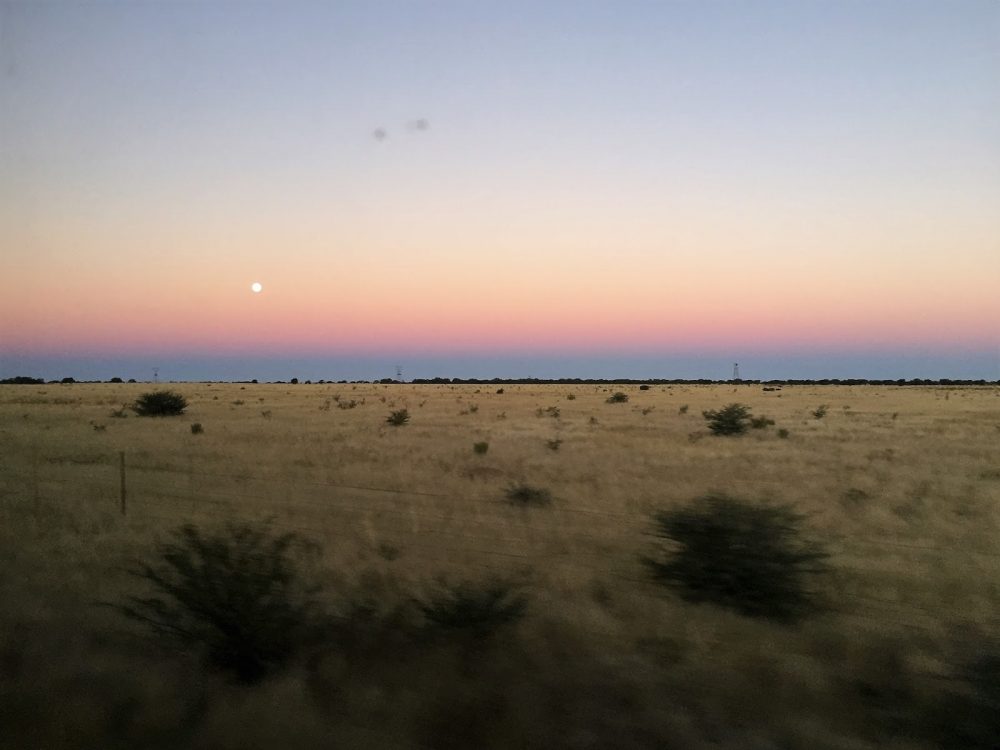 When we woke, vineyards were everywhere; the wealth of this precious commodity there for all to see. Village life, the unfolding countryside and the evidence of the fierce storm that had hit two days previously punctuated the landscapes, and pretty soon we were running late. It mattered little, as for most travellers who choose the train, we are there for the sense of timelessness that rail travel can still offer in this hectic age.

Paradise, our main man on board, kept things going pretty well inside the train, but alas had no control over signals and the speed of other locomotives. Thus, our affection for timelessness was well placed, for we had three bonus hours and an unexpected lunch, and finally rolled into the Cape Town station at about 3.30pm.

It was a lovely trip. It is a perfect way to travel between the great South African cities; not quite a simple overnight train, and yet not quite the ambiance of a private-train. It was a fine hybrid, and all the more enjoyable for the foibles that can only come with eighty-year-old rolling stock, many times refurbished, a multinational passenger group and the warmth that comes from being in the company of staff who are happy to be there, and more importantly, happy that you are there too.

It is most certainly a trip to be recommended and repeated.