Paramaribo, the wonderful capital of Suriname

Well, needless to say, after such a good introduction to the region, I had no choice but to return, and look a little more deeply. So armed with two friends, strong-armed to head off for ten days, we flew to Paramaribo and started the expedition.

Paramaribo is a wonderful place; vibrant, unusual architecture, activity and a fine local beer called Parbo. We stayed not at one of the larger tourist hotels in town, but at the Guesthouse Amice, a twenty minute walk, or five-minute cab ride, from the centre, and a fine choice it was.

The property is small, with only ten or so rooms, friendly beyond belief, clean and most comfortable. It has a swimming pool that falls well short of Olympic proportion, but is ideal to cool off after exploring the town. And there is much to explore.

The centre of Paramaribo is delightful; dating back to the late 1700s, it is a mix of British and Dutch colonial imaginations, some of which were apparently quite fertile, contemporary adaptation, tons of colourful mini-buses, a huge river incorporating among other flotsam and jetsam a scuttled German naval ship, and beyond all, people.

The Surinamese, like their cousins in Guyana and French Guyana are of six or seven races; the indigenous Amerindians, Europeans (mostly British, Dutch, French and Portuguese), Africans brought as slaves, Indians and Javanese brought as indentured labour and the Chinese. In Paramaribo the central mosque lies adjacent to the main synagogue, a symbol of the regions astonishing lack of cultural friction. The communities live together, and offer the rest of the world an image of tolerance that seems to be in very short supply elsewhere.

Our hosts on the second morning, Oswald and Marjorie, are a delightful couple involved with the tourism board among other interests. They picked us up early and drove us first to their delightful house, tranquilly located by a river close to town, and then to two wonderful local markets.

Markets are terrific; colourful, bustling, wonderful smells and smiley people surround one, and the spirit of the local community becomes vividly evident. And so it was at the local affair where a myriad of food waited to be prodded, admired and finally taken home for food. We went next to a big central market, and there, in addition to hundreds of stalls were several small restaurants serving a variety of astonishing foods. From very peculiarly coloured pastries, of a particularly sticky demeanour to the most interesting bowls of Javanese soup, everything was available. And, it must be said, in conditions that can only be described as scrupulously clean. Not a fly to be seen, a great injector of confidence when buying any food at a market.

Then to explore this remarkable town; we drove to Fort Nieuwe Amsterdam, an eighteenth-century fort on the far side of the Suriname River; it is a fine place to wander, cogitate, ponder and generally imagine the life of both the settlers and their slaves. It would have been a very, very hard life, and in its way as unforgiving as life was in the Arctic for their contemporary explorers. 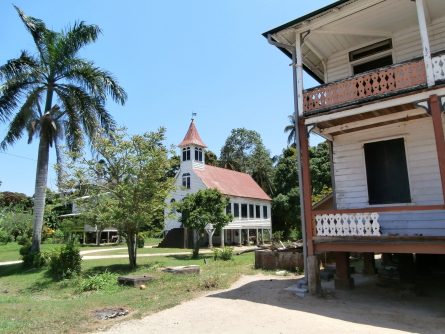 Heat, humidity, disease and hardship were rife; the jungle, a vast and untamed region to be hacked away with primitive instruments, and being Dutch, hundreds of kilometres of drainage ditches, polders, dykes and sluices to be designed and built. Lives by the thousands were lost in this extraordinary quest, and it is easy to wonder why.

Contemporary Suriname, after centuries of colonial life, a revolution, a massively destructive civil war has now settled into a most positive rhythm. Everywhere is construction and activity; the city is growing and concurrently the distant rain forests are beginning to surrender their trove of mineral riches. Money is flowing into the country, and positive investments, we are told, are starting in education and health.

It is a country of extreme natural beauty, and one that has a fine opportunity to develop along its own path. There is much to be positive about Suriname.