Northwest Spain; Riding the rails past 89 stops from Basque country to Galicia

Riding across Northwestern Spain on local trains is the slow way to travel. Eighty-nine stops. across Spain.

Well, eighty-eight actually since boarding the little railways of northern Spain at Hendaye, but the past days have proved to be most instructive. Firstly, it has to be said, was the instruction that these trains were not designed to travel great distances.

Most of the clientele are travelling for relatively short journeys, but putting that aside, they are comfortable, clean and as cheap as chips.

To date the journey from Hendaye to San Sebastian (12 stops/€1.70) was short but a very necessary way to cross the border. While borders no longer exist in any practical form for most travellers within Europe, they exist in the past.

No more, however, for the European voyager, now the simplicity of the EuskoTren service, thoughtfully extended the one stop across the bridge for those of us needing to enter Spain. 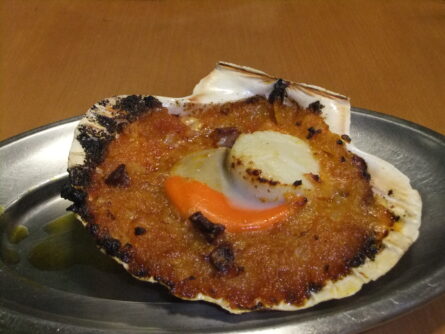 San Sebastian is absolutely wonderful. Originally scheduled to be a thirty-six hour stop before the railway marathon, it was cut short to ensure the adequate cleaning of the French house. And so we were restricted to a single night to graze the city’s many pintxo bars, enjoy copious amounts of Basque cider and sample foods as diverse as pig’s ears to strange, unnamed but delicious vegetables.

And then the journey began. From San Sebastian to Santander (36 stops/€5.25) was, frankly dull in the most part. It is one of Spain’s few economically active regions, and as such, full of factories, chemical plants, new and extremely uninspiring apartments, and the weeping concrete of thirty-year-old crumbling buildings. With nothing quite finished, and drizzle to boot it was a touch dreary It must be said, however, that behind the industrial foreground, the backdrop of rugged peaks, wild woodlands and painted from a deep-green palate, it did trigger the odd sharp-intake of breath. The varied trainscape did, however, an instrumental exhibition of Spain’s recent past.

Only released from The Generalissimo’s iron grasp in 1975, there was a housing boom in the eighties that corresponded to the newly kick-started economy, and the natural desire for families to live in less crowded circumstances. Sadly, the building boom was uncontrolled by any effective town planning or building codes, and while a step up from the housing stock of, say, Vilnius or Tbilisi, it was pretty drab. It was also funded in Pesetas, a currency that was at least locally controlled.

Then came the Euro and the binge of credit that we see collapsing today, and here it is evidenced by the endless construction of both housing stock, with a large number of “For Sale” signs in evidence and massive infrastructure projects; interesting, but barely scenic.

And thus to Bilbao, a frankly dreary city with a few nice monuments and a well-known museum; but our interests were of the railway, and from the delightful Victorian station of the “CF de Santander e Bilbao”, we launched toward Santander, some 33 stops and €8.25 further east.

The train, now of FEVE rather than the EuskoTren of the Basque country was again suburban in nature, comfortable but without diversion. Other than the scenery which started to give hints of the wonder that is northern Spain. Now interspersed with industry, the landscapes offered a green usually restricted to Ireland, some delightful old villages, and in the distance, occasional glimpses of the mountains.

The train’s passengers got on and off with only us soldiering on to Santander at the end of the line.

Frankly uninspiring, at least from our cursory, overnight glance, Santander is a major centre of banking, fishing and a regional distribution centre. After San Sebastian, its nightlife, although late as is the tradition in these parts, was dull.

The tapas were boring, the cider unremarkable and more cafes than the more convivial bars that we sought. We did, however, have the first bottle (and second, one has to admit) of Albariῆo, the delicious white wine of northern Spain.

And so now, as we bounce along on a simply fantastic day, on the 50 stop/€15 leg from Santander, we climbed between the sea and the mountains far from industry, many of our fellow passengers being hikers with varying degrees of equipment on their backs seeking the obvious charms of the Picos de Europa.

It was the scenery that I had wanted; the luxury of sitting in a train, watching the world pass by and simply having time to think is precious to me, and today is proving to be wonderful.

In a few minutes we will pull into Oviedo, with time for lunch and probably a bottle of Albariῆo before the next train to the seaside town of Ribadeo. I have no knowledge of the town at all, it was simply picked due to (a) it being adjacent to the sea and (b) fitting well into the timetable, arriving there at 1730 and not heading out on the last day’s riding until 1130 in the morning.

More than time, I would imagine, to find some suitable sustenance and a decent place to sleep.