I can’t say that I was familiar with the Coxey Woxey Dixie Bird before I reached François (pronounced, of course, “Frans-Way”), a Newfoundland outport, but it was one of the rather interesting cultural identifications of this fascinating village.

“Newfoundland Outports”. The concept itself conjures up inclement weather, tough communities clinging to barren rock carving a difficult living from the heaving oceans.

They are ancient, by North American standards, and protect the hardy stock of Irish and Dorset fishermen who arrived in the eighteenth century, bringing fishing skills, music and a deep rooted sense of community to the rugged shores of southern Newfoundland.

The outports are not that easy to reach. A ferry that very closely resembles a small trawler, connects François to the Big Smoke of Burgeo and the provincial road network daily, (except Thursdays (and the first, second, fourth and fifth Tuesdays of each month)), and Hermitage to the East on Thursdays.

A ticket for the six-hour run to Burgeo costs a mighty $8.25 for the ride to the outports, and seems to be to be a bargain.

The vessel, the M/V Marine Voyager seems to be a sturdy little boat of some 238 tons; operated by the Puddister Trading Company of St. John’s, it zooms along the coast at a top speed of 10.5 knots, propelled by 746 kilowatts of diesel-generated power.

An alternative way to visit is on board one of the Expedition Cruise vessels that make rare stops, and this is how I ended up deep in François Bay visiting the community of eighty souls on the remote southern coast of Newfoundland.

A cursory glance at the headstones in the windswept graveyard show a preponderance of Durnforths and Fudges; I asked our delightful guide, Austin Fudge, about feuds, and the difficulties of a Hatfield & McCoy sort of scenario.

“No,” he said, “we get on fine. Nothing like that, except maybe in the spring time when a couple of the women over there”, he said with an indicative flick of his head, “seem to compete. With something; I don’t really know what”. Not a hotbed of revolution, then, but not a completely healthy community.

Its charming veneer of brightly coloured houses, steep cliffs and a boardwalk system to links the community together looks a little idyllic. Idylls however, tend to be in the minds of the beholders, and the population that has been in steady decline now lies at a precipitous level.

Thirteen children are in the school, but it is unlikely that they will remain in the community; when they go, and the older folks die, the community will go with it.

“Another ten to fifteen years” was the opinion of Sean Cadigan, a most affable and knowledgeable historian who travelled with us, “and the community will fade away” 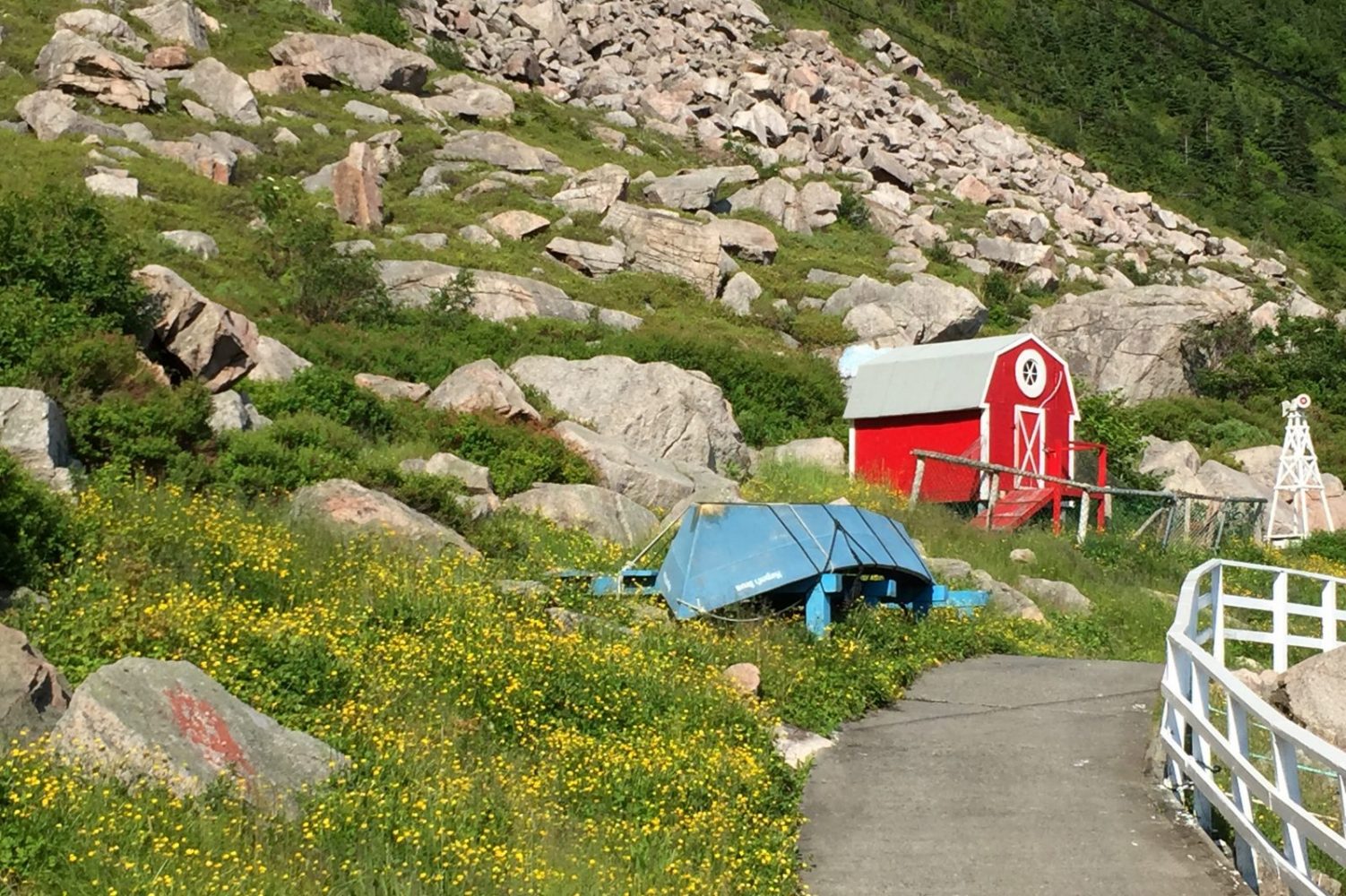 Lobsters seem to be the mainstay of the economy here; not to the level of the last decades of the nineteenth century when the Fudge family managed a canning factory from 1870 to 1900, but lucrative enough for the moment.

Only time will tell, but remote communities everywhere are feeling the inexorable squeeze of globalisation, and the concentration of government services in fewer locations.

The community is a fine place to visit. Scenically it is gorgeous, and the community spirit for which The Rock is so well known, is alive and well. Spending a day enjoying one of the several hikes around and above the community, enjoying some cogitating time by the harbour, casting a line with a local guide and simply chatting to everyone in town is rewarding.

And when the sun dips behind the cliffs, and the community gathers in the hall, be ready to dance … rocking the night away with one-man-band Darren Durnford is a fine experience.

Starting his set with a fine rendition of Dire Strait’s Walk of Life, Darren continued with a fine mixture of the bouncy, the obligatory local repertoire and the highlight for the crowd of gamboling natives and visitors, The Coxey Woxey Dixie Bird,

Guaranteed to draw one into the fray, and a palpable relief from the more conventional Chicken Dance, the music-man entertained and danced us into the night before returning by zodiac through the fjord-like cliffs to our ship anchored just off the coast.

Outports are unique. They are fascinating, accessible and will not be there for ever; absorbed by our ever-homogenizing world, their complicated simplicity should be treasured. For those fortunate enough to visit, either independently on the equally-fascinating Newfoundland ferry system, or on an expedition cruise, it will be an experience not easily forgotten, and a new prism through which to view our own hurtling lives.