Crossing the Mediterranean by Ferry

Ferry: A great alternative to flying

I like journeys, and I enjoy the feeling of travelling; of actually going somewhere. A ferry journey is wonderful, and the Mediterranean and Adriatic Seas are alive with them. Airlines may be expedient and do their job well, but given the option of a train, ship, car or bus, I will take the surface mode every time.

I was planning on a trip through the Western Balkans, and first edging toward Montenegro and the railway journey between Podgorica and Belgrade, the ferry seemed to be a welcome option, and so it was that I booked passage on the AF Michela on its twenty-seven hour run from Trieste to Durres in Albania.

It comes as some surprise to many just how many working ships ply the waters in and around Europe. These ferry systems offer a lifeline to the huge quantities of freight that moves around, and to passengers seeking a slightly slower and more economical means of travel. The Mediterranean and Adriatic seas are awash with shipping, from the luxurious cruise vessels to tramp steamers plying their trade between secondary and tertiary ports. The ferry lines lie somewhere in the middle.

Curiously for one who lives in The Prairies, this is the third time in the past year that I have used an overnight ferry. Last year I travelled from Palermo to Tunis on the Grimaldi Lines ship, and more recently I used the P & O service from Hull to Rotterdam. Each time I found comfortable surroundings, decent cabins and all in all, a good way to travel. The common denominator was the difficulty of finding the ship in the first place.

Now don’t get me wrong; local taxis know well where they depart from, but ships’ sheer bulk and their requirement for water mean that the docks are where you need to go, and as freight is the primary focus of contemporary harbours, passenger services are often tucked away as an afterthought.

Seeking out and boarding the Adria Ferries’AF Michela bears little resemblance to either catching a train or a plane, and is a far cry from the glory days of ocean liners.

Passengers are, basically cargo; cargo that can walk and load and unload itself, but nevertheless cargo, and the siting of the “passenger terminal” among acres of lumber, railway ties, roofing tiles and other bulk construction materials makes the point well. 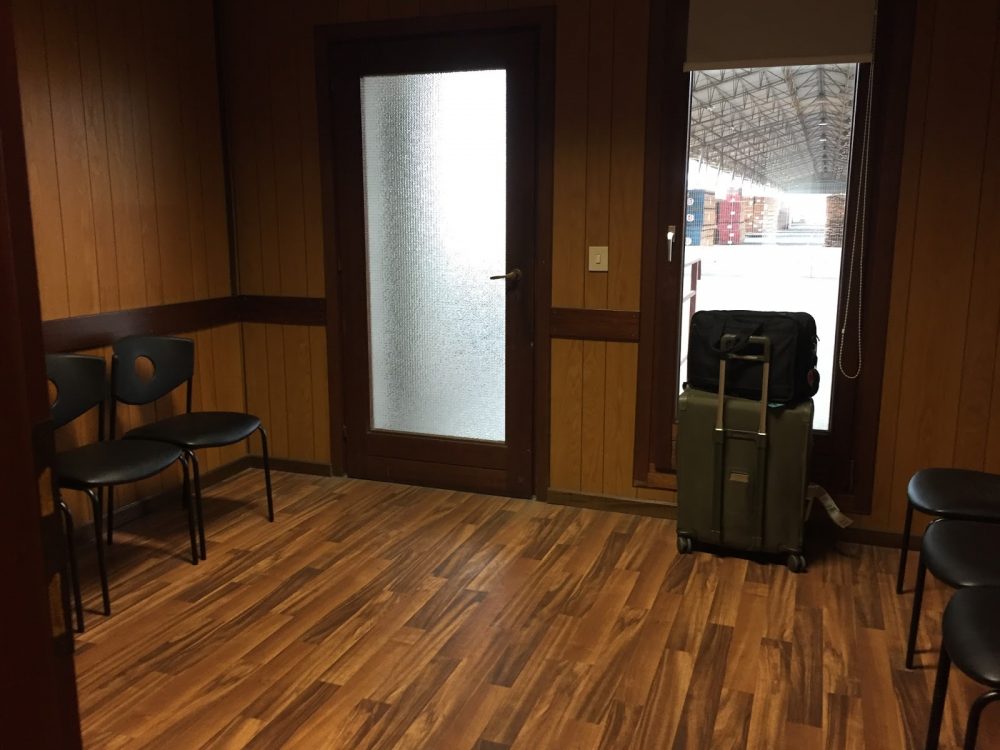 The passenger entrance and waiting room in Trieste

I checked-in three hours early. Other than the small difficulty of spotting the Adria Ferry office and a functioning building, I needn’t have done for a couple of reasons. The first was that there were only ten passengers travelling that day from Trieste, and the second was that having received my boarding pass within a minute, I sat in a small room for the next two hours before the remaining nine sauntered in. A car was sent to carry the two foot-passengers, and having completed the passport formalities we boarded the ship. Ten passengers on a one thousand passenger ship leaves considerably room to move around, and having found our allotted spaces and tied down the few vehicles, we left shortly after noon. 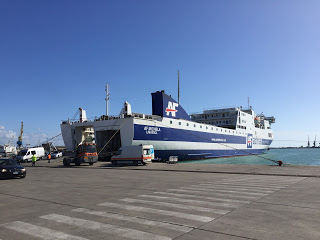 The AF Michela is functional, more reminiscent of the East German ship, the m/v Greifswald which I had crossed the Black Sea some years ago than the QE2, but it does the job. Nine of us did rattle around a bit, and one can sympathise with the catering staff who served an adequate if dumbed-down selection.
The kitchen is enthusiastic, but more of a canteen then a dining room, but they do offer a very reasonable Pinot Grigio to wash down the pasta and salad.

The cabins are plentiful (offering beds for up to 428 travellers), although I would suspect that it all gets a bit steamy and cantankerous when it is full and the summer sun is beating down.

An additional 572 passengers can be accommodated as “deck passengers” apparently, but I gave up counting the available chairs. It would be tight.

There is a bar, a small shop and that’s about all. The ship, built in Limassol, Cyprus in 2001 and displacing 24,481 tons of water as it ploughs forward at about 18 knots, has some quirks to it. Its history is a touch murky; the operating certificates in its (Otis) elevators were signed in Shanghai, and here and there are signs written in Chinese and Korean characters. It has served a variety of masters and has been known as the Cartour, the Vinashin Prince, the Hoa Sen and the Stena Egeria before being chartered to Adria Ferries for one year last October. It has done service in The East, offering cheap booze-cruises to a Vietnamese clientele, and it appears, by the architectural plans evident hanging on the walls, that it was refurbished in 2014, but from what and to what, I am unsure.

The waters are calm. This would be a blessing to many, but I do like a bit of strong water. It seems to be my curse that good weather follows me much of the time, and while I usually appreciate being a small high-pressure zone, from time to time, a little storm would be nice. Today, unfortunately, all is calm.

Shortly the Albanian coastline, just visible on the horizon, will draw closer, and we will disembark and explore Durres. It is only an overnight stop, and the journey continues tomorrow by bus, as I head from here to Podgorica, the capital of Montenegro, and the start of the railway journey to Belgrade. 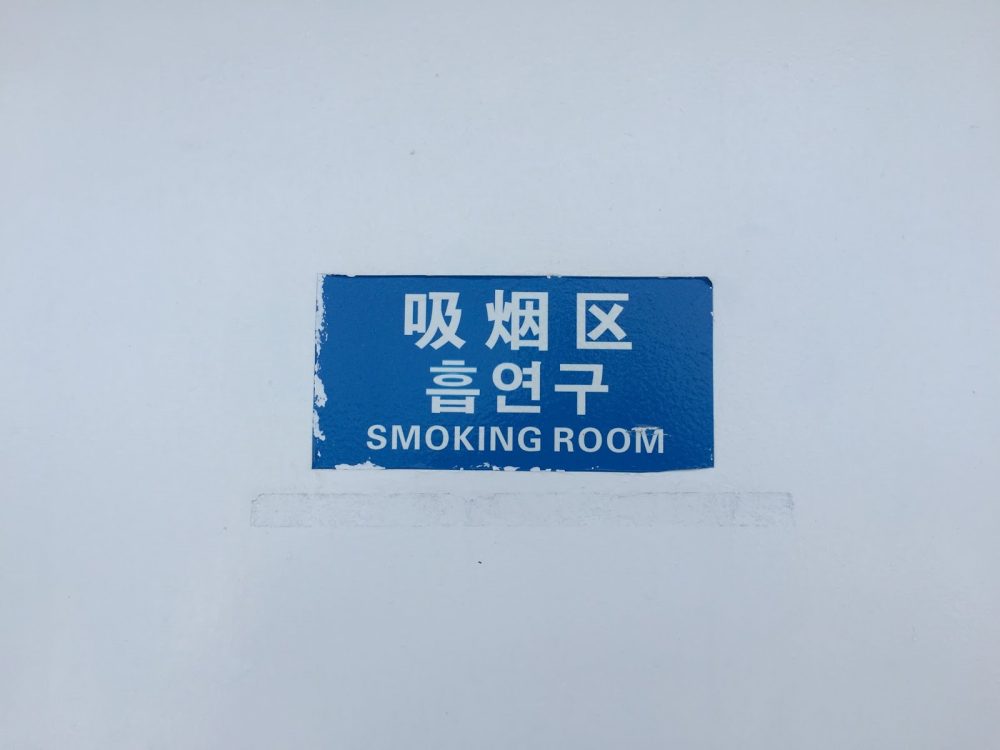 I know there are a lot of rules on a ship, but this exhibition of fine print was really a bit overwhelming. The Eastern scripts tell a tale of the vessel’s history.