Guinea, fabled perhaps for fowl and pigs, although I have no idea if there is a connection between these eponymously named creatures and this rather unusual West African country, is remarkable by almost any standards.*

Its politics are loud and unpredictable; its countryside is raw and overwhelming; its people are friendly yet reticent; its weather extreme, and its roads, dear God, its roads ……

Racked by historical context, a largely superficial acceptance of democracy, ravished by Ebola and left often to its own devices, Guinea has developed erratically. After the French unwound their empirical occupation of much of West Africa, the Guinean leader, Sekou Touré turned down an opportunity to participate in a “French commonwealth”, seeking full independence instead. French wrath was immediate and severe; investment and aid ceased and French capital fled. The country, limited in capital, skills and connections limped along, surviving one crisis after another. Even today, the country’s rather cavalier approach to its constitution is causing some disturbances that compelled our route through the country to change, and our introduction to Guinea’s secondary and tertiary road system was inevitable.

“Roads” as a word, conjure up images of vaguely straight paths between two points, bending to avoid major impediments, but generally straight and showing signs of attention. Leaving the appalling secondary roads of Senegal and forging our way through the Parc Transfrontalier was an exercise in faith. GPS signals had disappeared, maps were inadequate and fundamentally optimistic, or even decorative, and direction was determined by encouraging puffs of distant dust and the potential for edging forward a few metres. This was no land for an ambulance.

The Parc, it must be said, was quite stunning; thick Savannah, craggy rock outposts, gentle but austere mountains all tinted with the deep red dust that formed the basic palette of the landscape.

Perhaps there was wildlife, but we saw none; to the north of the border, in Senegal, the national park claims the residence of elephants, hippos and more, and insensitive to national borders, these animals may well roan the borderlands; given more time, and a local guide, I am sure that we would have enjoyed the visceral beauty of the Borderlands. But alas, this was not to be, and as merely a fascinated observer, we challenged the boulders and fallen trees sent to dissuade passage and headed on blindly toward Gaoual. 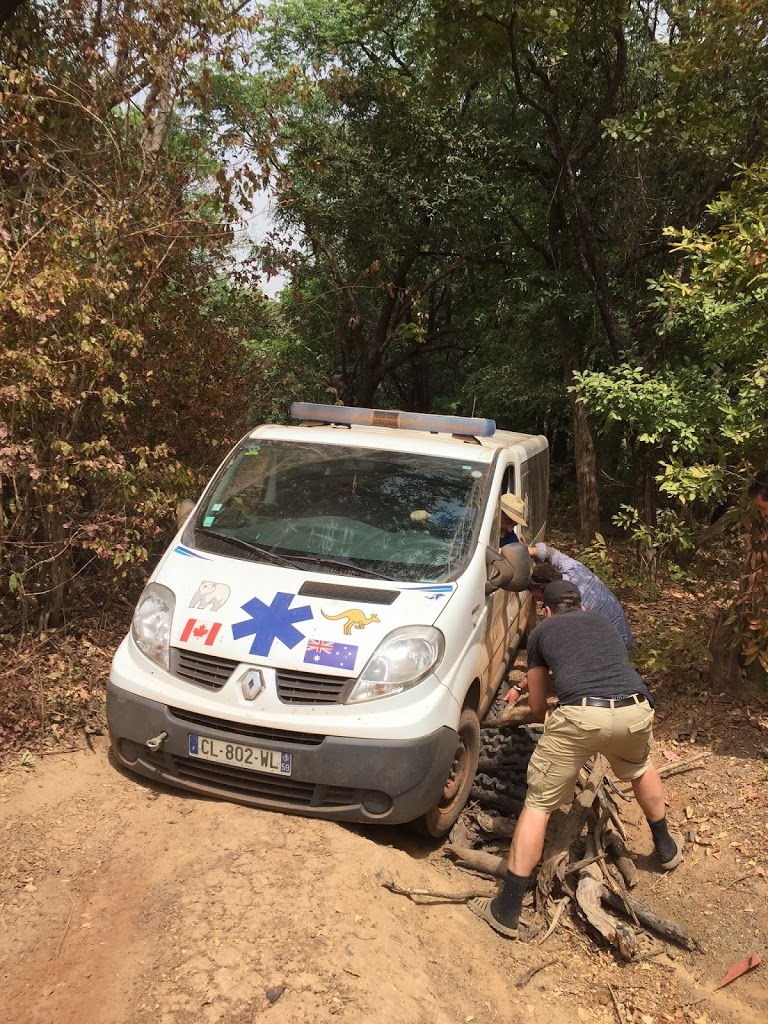 The road to Gaoual is littered with those that didn’t quite make it. We did.

Crossing the frontier at a location so remote that the Guinean border force refused to attend, and instead set up their post some 50 kms further into the country, we lurched, staggered and rolled our way over stones, dried river banks, wet river banks and past villages so bewildered at our appearance that no words nor gifts of pens, pencils, notebooks or games could quell their apprehension, we swayed on to join the country’s secondary road system some thirty kilometres to the north of Gaoual, our target for the night’s stop.

The last hour was gentle; the basically paved road, a contrast to the bone-shaking river banks that had caused even 4WDs of our group to curl up and die, was easy, and as we drew into the “campsite”, anxious for a few hours’ sleep, the thought of the next day and the 500 kms to Kindia, in the south of the country had been carefully set aside.

Nine hours is a long time to spend passing 180 kms of a national highway, but such is the state of said highway, and I use the word sparingly, that prudence should have dictated twelve. However, we had 500 kms to travel until the bivouac, and unwilling to risk a night in The Open, we plugged on, bouncing past wide-eyed villagers, living lives in small, ancient communities by the side of the road. 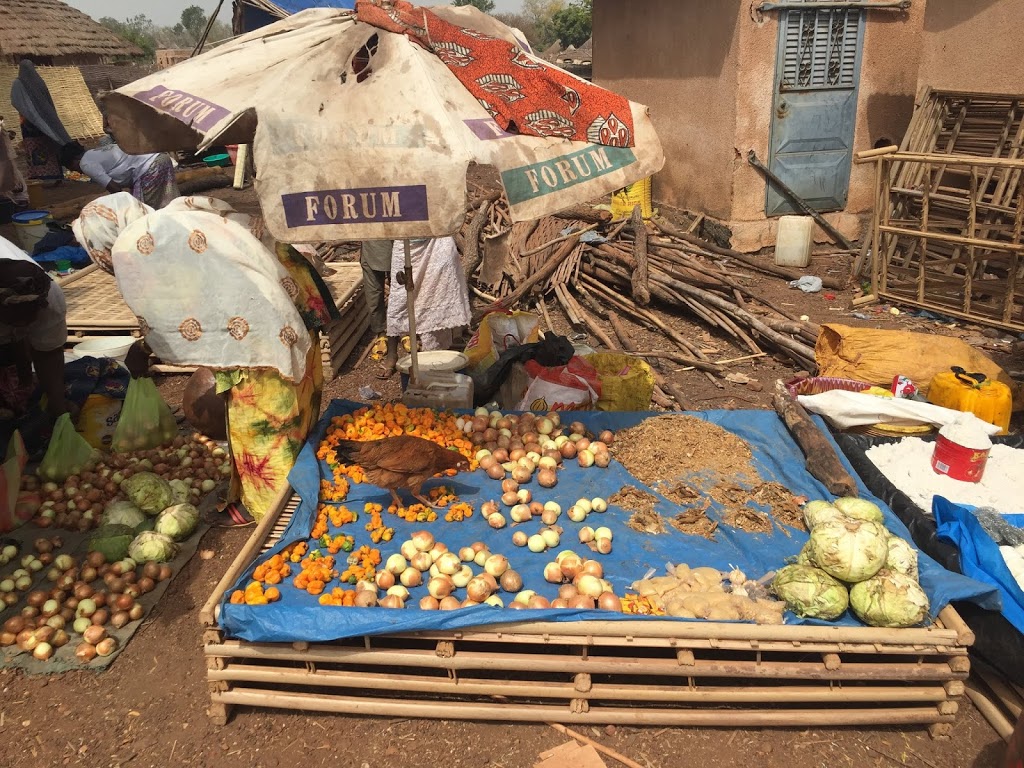 One shouldn’t sentimentalise small, isolated communities, but it is hard not too.

Looking at these small communities of perhaps seventy people, imagining a DNA strain that would sink so deeply into the land that the beginning of time would see these peoples’ ancestors engaged in vaguely similar activity, it is difficult not to wonder whose life is less stressful and even simpler.

With sufficient food, a well, and children and woman working and playing in the compound and the men in the fields, life had the essentials.

Impossible for anyone brought up with the joys of electricity, restaurants, buses and credit cards to comprehend, but it was a simplicity that mirrored some of the more energetic New World movements becoming so strident in the world’s more affluent economies.

It is hard to travel through any country without comparison. Each destination is identified by its similarities to other destinations visited; each country measured against other familiar lands. This evaluation offers some comfort: “It’s just like that time that we did Bolivia, Darling”, and is an inevitable part of discovery.

Yet travelling among peoples so different from any others, with no country offering even a way station to rural Guinea, observations and ideas became disjointed and erratic. Each new village, each new landscape and each new and exacting pothole became its own adventure and a singular experience. 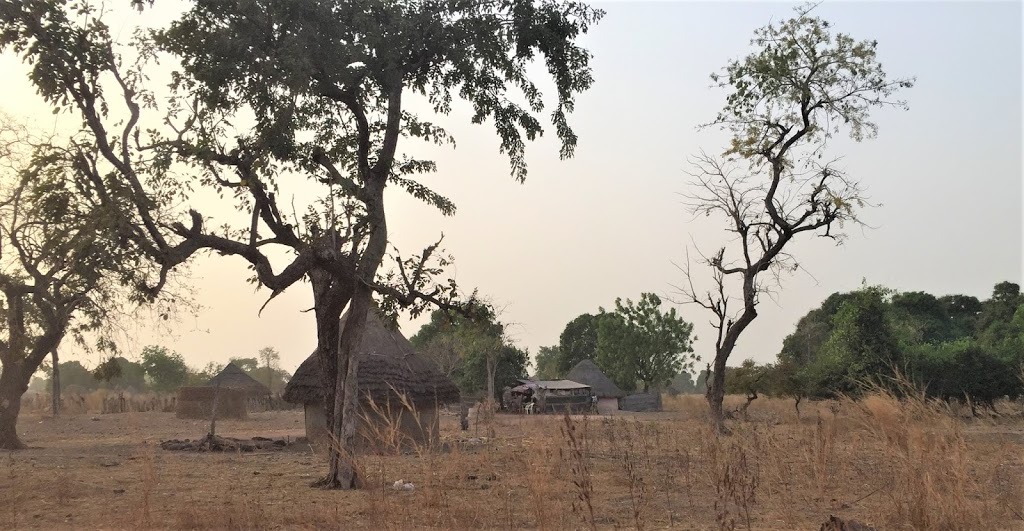 Guinea is different; it is what it is, and thus reduced simply to landscapes (stunning), people (captivating), villages (fascinating), roads (startling), politics (impenetrable) and the life around us (vivid), Guinea became that most difficult of destinations: new, real and most interesting.

The 180 kms of spine-fragmenting highway was, of course, memorable, and as we finally reached the asphalt at Boké, and headed toward the south at a breakneck speed, the evening started to draw in, the police checks more insistent and the traffic more erratic.

Deciding that a hotel in the capital, Conakry, was preferably to the final 80km push to the “campsite”, we left the highway and embarked on a forty kilometre run along the peninsular that houses the capital and its attendant growth, to out hotel, chosen at random, but located at the far end of the spit. 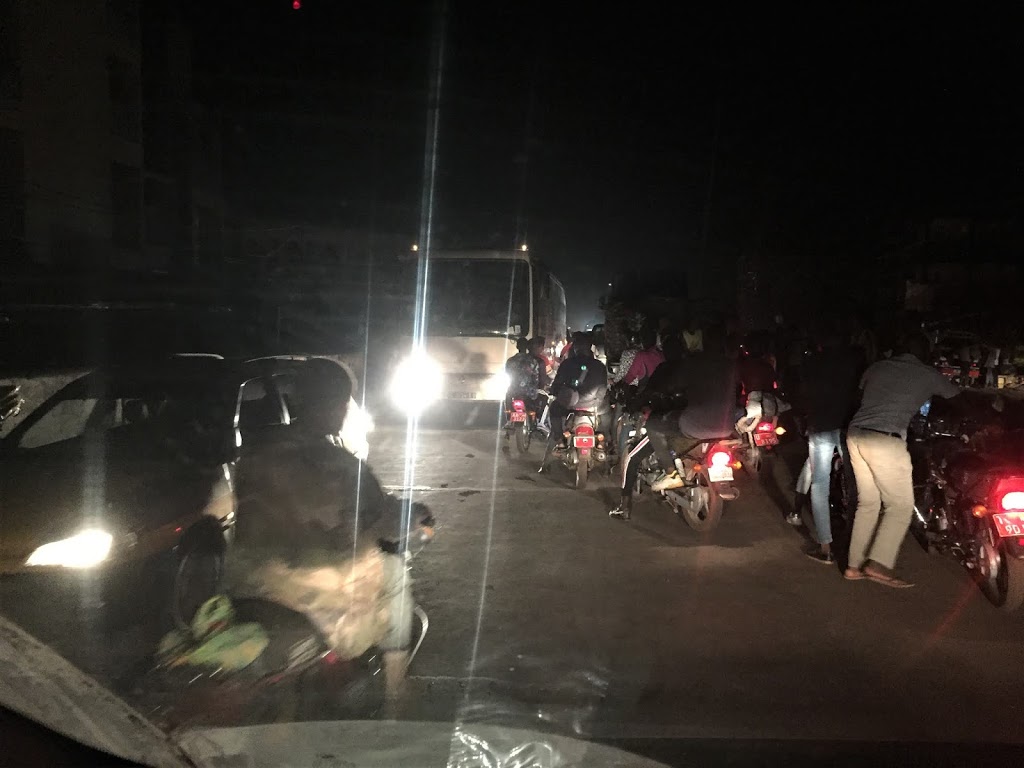 Nearly midnight now, the traffic was heavy and dark; markets still active although it seemed impossible to tell what each stall was selling; strong, pungent African beer permeated the atmosphere and the unsteady gait of folks weaving through the traffic. This was a city with little money but huge soul; vibrant music blared from bar after bar; thousands of people were out, perhaps the streets more comfortable that the corner of a room that could be called home, walking, talking, dancing, singing and waiting for the next morning, and another day of hustling the gritty streets of Conakry.

Capital cities attract people, and as we retraced our footsteps in the morning, the music silent, the food sellers subdued the markets were starting to find buyers for their goods, the needs of the two million people that call Conakry home to find some money before the sun goes down were obvious and primal.

The run to the border was, for a change, uneventful albeit uneven; our graceless departure from this fascinating country was a touch discomforting.

Guinea has character; it has beauty and it has people who live lives that wash up at the borderline between north and south. We did it no justice as we drove through, focused on bad roads rather than the gentle lives of the countryside and the harsh, but so focused lives of the city.

I would like to return to Guinea; next time with a local guide, time and a deeper capacity to appreciate this very African country. 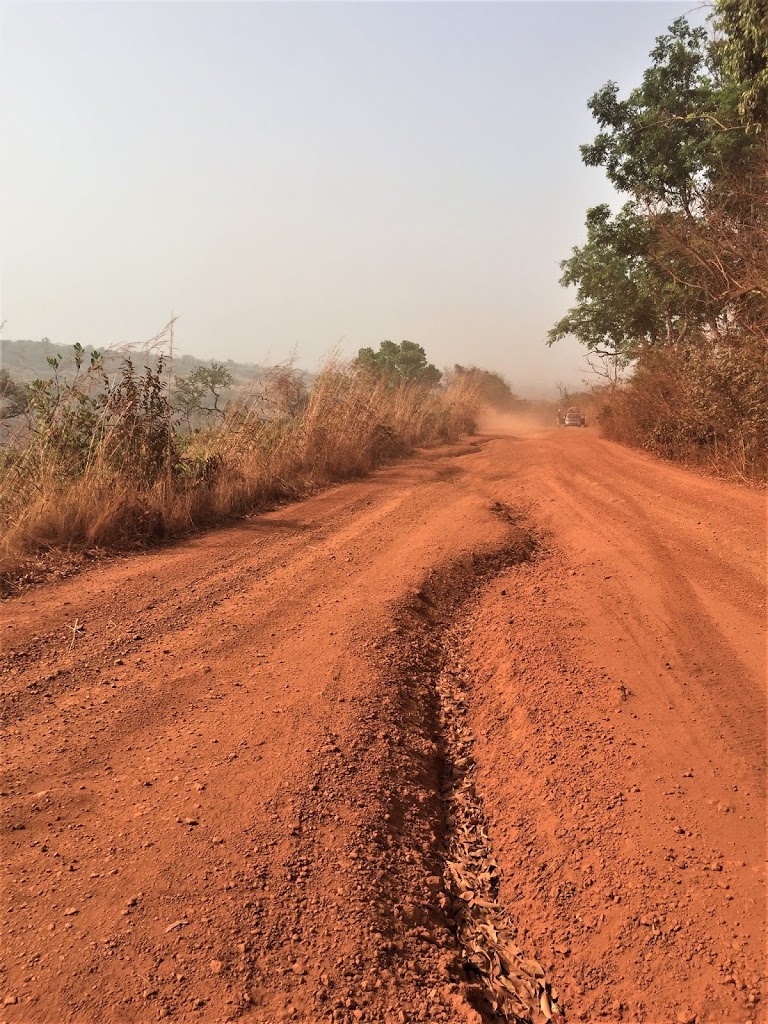 * PS: I know that Guinea pigs are Andean, and that Guinea Fowl originated in Tibet, but are now common worldwide, including sub-Saharan Africa!