Chechnya; a glimpse of an extraordinary culture

In truth, I didn’t actually get to Chechnya, but I might as well have done so, and I loved the first flake of this remote, North Caucasian culture.

There is a valley in north Georgia called the Pankisi Gorge; sparsely populated for millennia, since the 19th century, 10,000 Chechens, fleeing one brutal war or other, settled here as refugees. This convenience has continued to this day, with more fleeing the 1993 war when the Russians so pitilessly bombed this small republic. Today, the vast majority of the Pankisi Valley are of Chechen origin, and here, Islam lives peacefully with the local Orthodox faith.

And it was here that I was told of a man born in 1870 whose son had a mobile phone; I knew it to be true because the son in question (Mamuli Gumashvili, b. 1955) was sitting next to me at lunch and told me himself.

His father, you see, had been seventy-eight years old with only daughters, and no son to carry his name. After his wife died, and leaving a suitable period for mourning, his daughters found him a second wife, some fifty years his junior. She bore him another daughter when he was eighty, and finally a son when he was in his eighty-fifth year.

If this Year Of Great Celebration was 1955 and he was 85, it follows that he was born back in 1870. And I can vouch for the fact that his son has a mobile phone.

And a Dechik Pondur; this three-stringed instrument, related to the Georgian Panduri, is plucked to accompany the haunting music of this remote region, and following the most delicious and over-the-top lunch he played for us.

We were in an odd place. The community is called Khadori, and it lies beyond the community of Birkiani, the most northerly dot on the normal government maps. It is small, remote, deep in a valley of presumably high, but mist-obscured mountains, and is home to the most optimistic hotel and restaurant I have ever visited.

There may be a need for a sixty-seat facility here, but I can’t really see it; the accommodation on the other hand, a touch rustic but rather pleasant, would be most useful to those few tourists heading to the valley. Tourism here would be for hikers, those interested in anomalies and the co-existence of Islam and Orthodoxy, those interested in the ethnography and culture of the otherwise unknown Chechens and those simply interested in deepening their knowledge of the most fascinating country of Georgia.

Believe me, the food and wine are worth meeting; our lunch, modest I am told (but disbelieve) was served with passion and overflowing sense of hospitality; the meal was spectacular, and once more highlighted what a very fine destination Georgia is for vegetarians. Wild leeks, fresh tarragon and beets, salads and local cheeses, nettle pies and aubergines accompanied the barbecued meats and fortified us for the inevitable toasts. 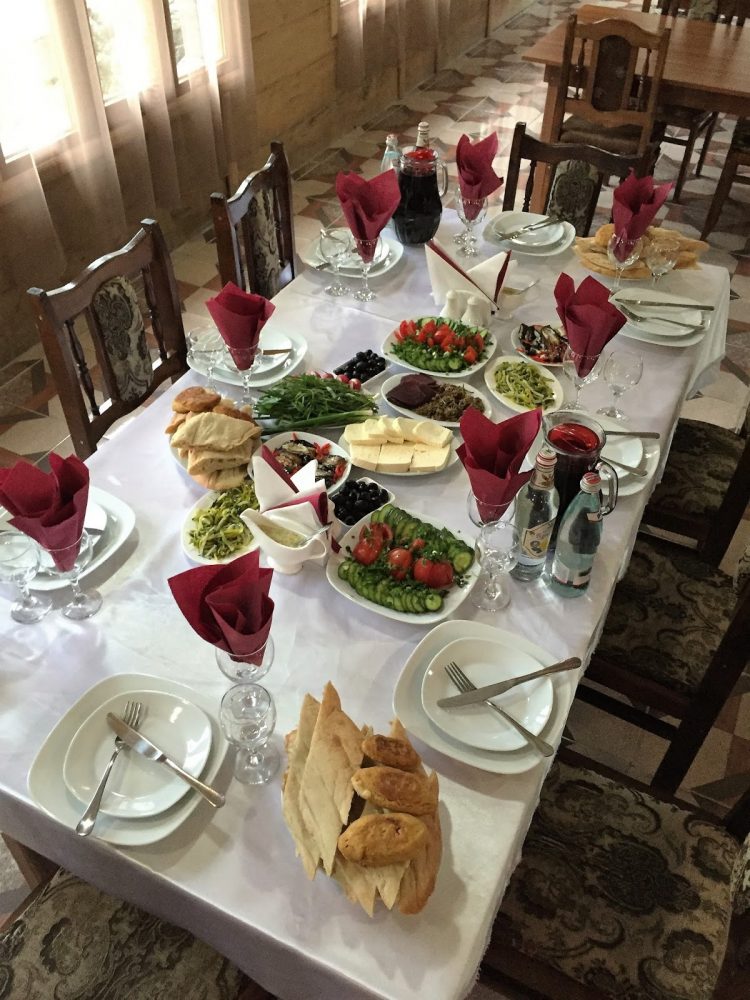 And so we left, driving past the valley’s communities, noting the mosques and chadors and marvelling at the 150 years of integration that has finally let peace come to the Pankisi Gorge. While it is true that some young men have left the valley to join Daesh, they are not seen locally as representative, and the vast majority of the Chechen population are dismayed by this intrusion.

Not, I should add, that my rose-tinted glasses prevented me from realising that this had also been a lawless frontier, the centre of drug and gun-smuggling, kidnapping and much other anti-social mayhem until the Georgian government of Michael Sakashvili came down in it like a ton of bricks in 2004; but it was neither ethnic nor sectarian mayhem, it was simple villainy. So that’s alright then.

Georgia never fails to surprise and delight me; for such a small country (69,000² kms) there are so many very different and superbly variant places to explore; there are different cuisines, different musical traditions, different languages, and a eye-watering variety of landscapes.

Today was no exception, and as I sit and write these thoughts, I can’t help but wonder what is in store for tomorrow as we head west to Imereti.

re you interested in travelling to Georgia? Come and join my tour “Georgia: its wine, food and culture” tour in 2021. For full booking details, please contact me at max@maxglobetrotter.com