The Budapest Bamako Rally: Hard driving across the Sahara Desert

Driving across the Sahara Desert may appear to be an odd thing to do, and perhaps it is. However, in the same way that remote places seem less isolated when visited, the Budapest Bamako Rally made driving from Morocco to Sierra Leone seems quite normal as one motors south in the company of other like-minded folks.

Except, of course, in Guinea, but that is another story.

I am not at all sure how this journey really happened; it started, as all good adventures do, in a wine bar. This time, in Tbilisi with my friend Ia Tabagari.

She, the most indefatigable woman I have possibly ever met, was itching to go on a long drive, and had found the Budapest to Bamako rally somewhere in the ether.

It was, we agreed, a fine idea, and fortified by the fine local wine decided that we should enroll. We didn’t, mostly because the security situation in Mali deteriorated; however, like so many ideas that burrow their way into one’s brain, the idea of the B2B rally refused to budge.

Fast forward a couple of years, and an Australian friend, Alan Wallish, the owner of a fabulous Cairns-based reef operation, Passions of Paradise, and a colleague and friend these thirty years, visited Winnipeg to relieve the boredom of Canada’s West Coast for a few days last summer.

The idea was pitched, agreement concluded, toasts drunk and the entry completed. Our participation in the 2020 Budapest to Bamako rally was secure.

Adding three additional friends and a 4WD Fiat Panda from the Orkney Islands the package was completed and the countdown was underway. We had purchased an ambulance for the journey, basically on a whim, but with the thought that it would be donated it to a local medical facility in Sierra Leone upon arrival. At this point, observant readers will have noted that Bamako is not actually located in Sierra Leone; this is, of course, true, but due to the security situation in Mali, a new (and considerably harder as it turned out) route to Sierra Leone had been drawn to avoid potential bloodshed.

Spurning the actual start, our idea was to meet in Malaga, as heading from France to Budapest for the start of the rally only to turn around and retrace the 1500 kms seemed a bit daft (even by our standards), so we agreed that the ambulance would be driven to Malaga to await the two Australians and we would continue from there, meeting our Orcadian cohorts in Ceuta. The Orcadians, it should be noted, had decided to drive from those distant, northern isles to Budapest and then on to the south of Spain, arriving in a state of semi-chock. So far so good.

And so the journey started.

The pace was undeniably hard. The premise of B2B is, of course, a rally, but the inclusion of a “Touring” category, not to mention the “Spirit” category lulled many of us into thinking that there

would be a slightly gentler route, with some time to enjoy and learn about the countries through which we passed. Alas, this was not to be. The tempo was sprightly, and although the Spirit route did not incorporate many of the rather more rutted and inhospitable terrain the racing 4WDs were challenging, our statelier vehicles still needed to reach camp at nightfall, and time to sightsee, explore of even photograph was very limited. Frankly, some of the roads would be better suited by a convoy of Mars Rovers. 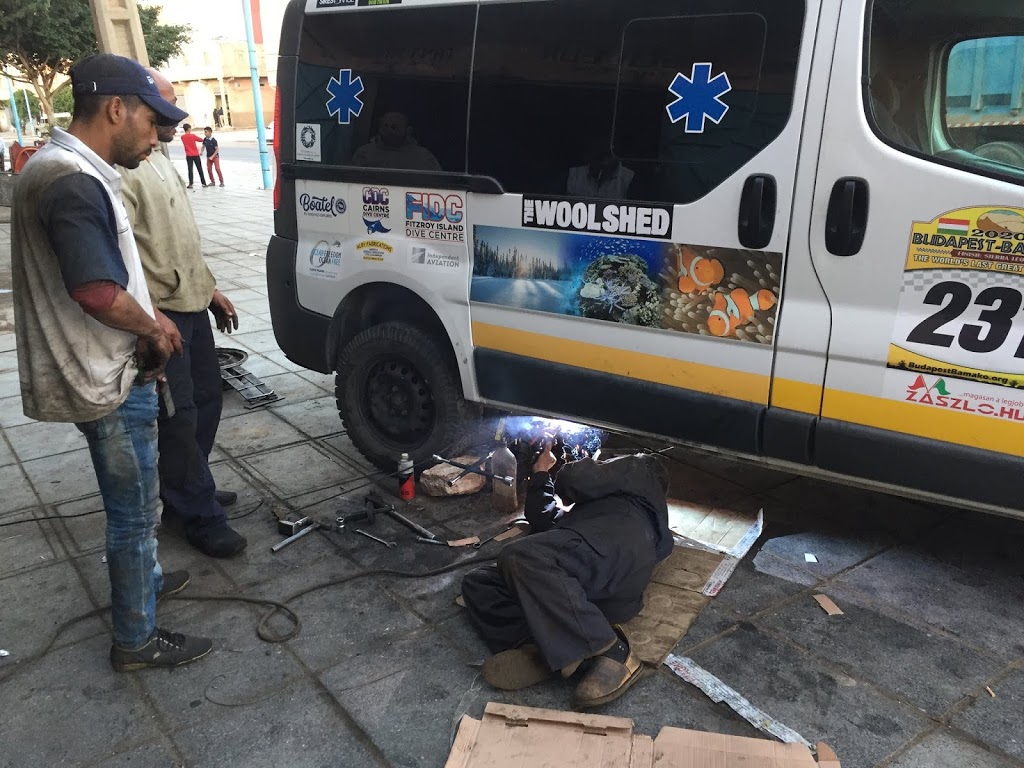 The roads unfurled with the topography. From the smooth and perfectly cambered highways of Morocco passing first through intense agri-business then the High Atlas Mountains and then, as the mountains flattened into craggy plains and desert the roads became straighter and dustier, and finished in accordance with the country’s road-paving budget.

This budgetary disparity was brought sharply into focus some 2,800 kms south of Ceuta at the Moroccan/Mauritanian border. Between the two customs posts, placed some seven kilometres apart, lies the most desolate no-mans-land that I have seen to date.

The first two kilometres, presumably Moroccan and finishing at the actual border were paved, the subsequent five, lying now in Mauritania were not, and the way forward simply a vague channel of adventurous rock strewn with a dystopian collection of burned-out cars, trucks abandoned in the pursuit of some insurance swindle or other, and a warning that beyond an unidentified boundary there are land mines.

We ventured no further than the identified boundary, and following a brief concern that one of our party who was suffering from a hangover, would be identified as a Coronavirus or Ebola carrier due to his elevated temperature, we passed through the gates, passed the border and entered the start, dry and harsh landscape of Mauritania.

The Sahara is a stark and unforgiving place; its brutality is reflected in the harsh housing, the scrubby animals, the layers of clothing protecting against the ever-blowing sand and the unforgiving sun.

It has a beauty, a raw grandeur that embraces the horizon and everything within it; it is a land of strict rules and strict traditions, without which life in this environment would be impossible.

The desert eventually gave way to Savannah as we approached the Senegalese border, and as we drove farther south, the vegetation grew, the water supplies became more obvious and hints of the approaching Tropical zone became more apparent.

To see these changes in landscapes was remarkable; to see how the people living throughout the region adapted to their particular circumstances was fascinating; the drive, all 7,150 kilometers of it, was endlessly absorbing and now, as I sit in Freetown trying to collect my thoughts, I look back on the images of the journey with a degree of smugness.

Driving across the desert was cool!