Black Sea Ferry V: When we lose count of the days

Tension on board the MS Griefswald mounting, and I would not entirely rule out the possibility of mutiny. 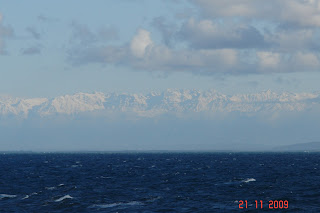 The Georgian coastlineWe are in a very strange position. Lying idle in the eastern end of the Black Sea, from the deck there is much to see. As I look to my left and sweep through 180⁰ I see three countries. Well, two countries and a heatedly disputed zone; Abkhazia, Georgia and Turkey. In Georgia, I can see both ports of Poti and Batumi and with a little imagination and a gust of wind can make out the clanging of the harbour cranes.

But we might as well be a thousand miles away.

We were late arriving here, and when we did arrive the port was closed due to the bad weather; this much I understand. We now hear that a Bulgarian ship that arrived after us is heading into port today, and we will get in tomorrow (100% maybe). This injustice is, I am advised, because the Bulgarian captain is willing to pay the port authorities while our skipper is not.

True or not, there are scenes of anguish as truckers lament their late arrival, parents worry about flu-threatening children, dowagers long to see their extended families and we all worry about the dwindling food supplies. And I am starting to worry seriously about my return flight to Canada.

Forget Baku! I am worried that I will not get to land ever again. We shall wander aimlessly from port to port seeking shelter for decades; a twenty-first century Marie Celeste.

Conversation, however, continues and is most interesting. Sitting with my Georgian and DDR friend discussing the Second World War was an interesting lesson in perceptions. Our memories of the war tend not to concentrate on the Eastern front, and theirs are equally peripherally concerned with the Battle of Britain. One fact that is inescapable, however, is the result of the carving up of Europe by the three allied powers, and the resulting social and economic disaster then the eastern bloc became.

Talking of development is interesting, and always seems to revolve around two themes; without jobs there will be no development and that whatever one wants to produce, with the level of production capability in the region it is impossible to undercut China.

And in a world of globalisation, domestic tariffs are out of the questions, and ridiculed by the Western-based economic hit-men that are pulling the strings of the global economy.

So what to do? There are domestic answers; Archi believes that by cutting red-tape and lowering business taxes from their current 60% level, small business would spring up, and I am inclined to agree. The countries of the Caucuses are blessed with fertile land, a good educational infrastructure and a relatively uncorrupted government, attributes that are rare in the developing world, and are surely preconditions to development.

But then again, he points out that the history of the region is conflict and one-upmanship, belligerence and posturing with strong clannish values. A wonderful home and culture, he thinks, but for the future? He shrugs.

And today the BBC headlines quote the president of Azerbaijan once more threatening military action to resolve a long-simmering dispute with Armenia regarding the enclave of Ngoro Karabakh.

Perhaps tomorrow will bring new insight, and with luck, landfall.