Black Sea Ferry II: All at Sea on The Black

Ah, the miracles of modern technology; the internet on the high seas. 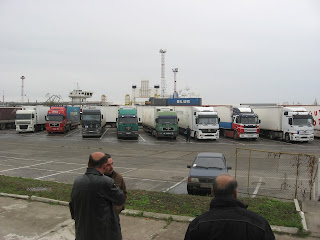 Loading the GriefswaldWe slipped almost silently away from the dock in Illychevsk at about midnight, some fifteen hours after I had been urged to be at the dock for “borrdink’. Why it took so long, I have no idea, although when I asked one driver, he shrugged and mimed the payment of a bribe.

I wouldn’t be at all surprised. From reading the newspapers’ accounts of the issues of the upcoming election, corruption seems to be endemic, and a very serious impediment to the Ukraine’s growth, and its ability to be taken seriously as a forward-thinking nation. There is an extraordinary gap between rich and poor, one that in previously uncompetitive economic times was filled by the Black Market.