Astana, now branded as “Nur Sultan” is the capital of Kazakhstan, and a completely surreal place to visit. I loved it

Tourists in Kazakhstan are, it may surprise you to know, less than common in November, and Canadian tourists in Astana are particularly thin on the ground. The early winter winds show their face in Astana, and the ground, dry and brown, is sheltering for the oncoming deep freeze. Astana’s winters are as cold as the Canadian Prairies, but one doesn’t come here for the weather.

It may seem like a curious place to go voluntarily. A simple cartographer’s dot in the centre of the vast Kazakh plains, in the northern reaches of Central Asia might not seem automatically attractive, but for those with an interest in the peculiar, and believe me, in this category Astana excels, there is no other choice.

It is a new city built on a fairly new, by historical standards, settlement. There has been a small community here for about 150 years, and some 20 years ago, the current Kazakh president, and in fact Kazakhstan’s only president, Nursultan Nazarbayev decided to build a capital city worthy of his country and far from the Soviet trappings of Almaty, the former centre some 1,200 kilometres to the south.

And so he did. With the help of a team of global architects led by the Japanese master Kisho Kurokawa, a futuristic city has risen from the plains. It is part Dubai, part Las Vegas and even part Pyongyang; it is a city of symbols that are purported to link to the Illuminati, Freemasonry and even the New World Order. Its buildings are astonishing, and its scope breathtaking. For more detailed observation, one should find Dr. Frank Albo’s superb book, Astana: Architecture, Myth & Destiny.

As a casual visitor, and I highly recommend taking a guided tour, one can’t help to be mesmerized.

The city is actually fairly small, and the horizon soon becomes a familiar jumble of landmarks drawing one back to the central core, the Presidential Park. This stretches out on the right hand bank of the river, surrounding the Norman Foster pyramid, the Palace of Peace and Reconciliation. In the summer it is a place of fountains, springs, flower gardens and coy lovers; in the nip of autumn it is a place for the odd gawking visitor to wonder at the immensity of the Astana Project.

Leave aside any thoughts of expense and hubris, this city is a statement and visiting is a delight

Kazakh people are delightful, welcoming and fascinated that the outside world has taken an interest in them. Unfailingly polite and proud of their country’s achievements (although it must be said that their attitudes toward Borat are complicated and mixed), visitors are made to feel at home. It is an expensive city by Kazakh standards, but not by those of Europe or North America. There are restaurants to suit all tastes and budgets, and hotels abound with optimism. Kazakh food itself is oddly uncommon, although the boiled mutton fat & gristle combination was an experiment too far, and a possible reason for its scarcity in the public domain.

Sightseeing is easy and endless. Simply look up, look out and look around. 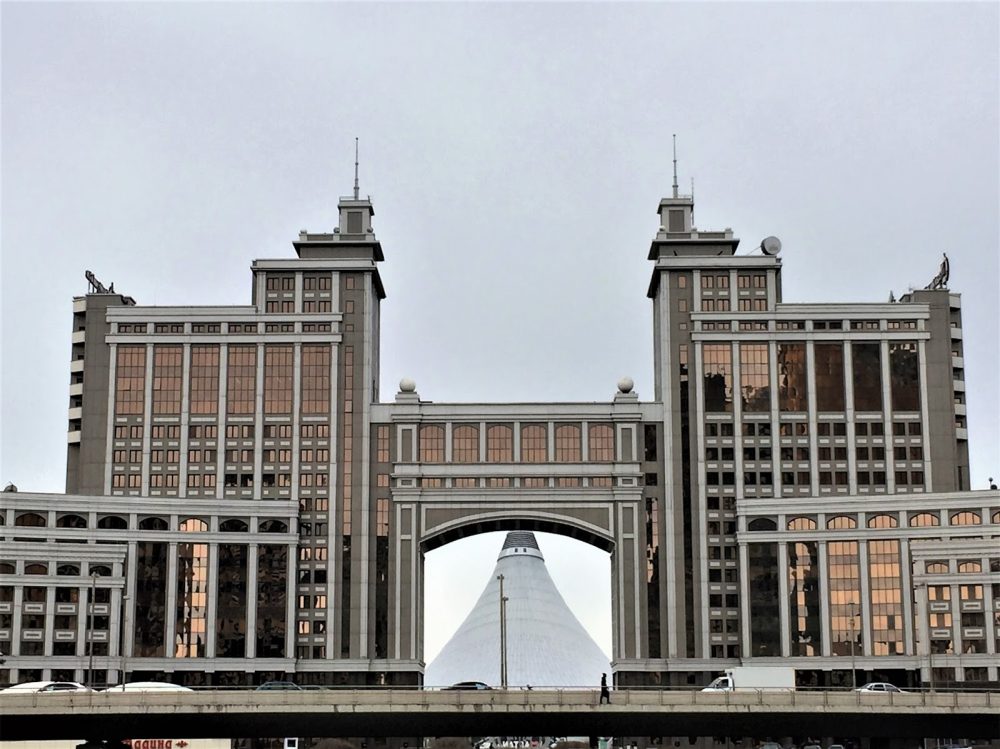 Astana is simply full of these views … monumental and built to last.

Start with The Pyramid, designed by Norman Foster as a global centre for peace, this is an interesting start, and indicative of the effort that has been put into the design of each and every monument and building. From there, the Central Mosque (Central Asia’s largest, and host to a 51 metre dome) and the striking monument to those fallen in war (made out of 63 tons of bronze) and a short step away.

Continuing back past the monument and crossing the bridge we reach the Presidential Palace, a predictably dominating feature at the eastern end of Watergreen Boulevard, a series of parks and monuments leading west and slightly north. It passes the imposing Bayterek Tower, a cornucopia of symbolism and the centerpiece of the city’s monuments. Here, if one reaches the summit, there is an opportunity to place your hand in theAyaly Alakan,a gilded hand print of the head of state, N Nazarbayev, and make a wish.

Further on lies Lover’s Park and just beyond, the Khan Shatyr shopping mall, another of Norman Foster’s creations. And, it must be said, that while I am not generally an aficionado of shopping malls, this one is terrific. Except, perhaps, on the first day of a school holiday.

Astana is a city of unlimited exploration. The bus system is great (30c per ride), taxis and Uber work well, and the local system of standing by the roadside and hailing passers-by for a modestly priced ride seems terribly functional.

Where to stop? There are museums for everything, vast and richly decorated theatres and opera houses, gardens and public spaces. The only thing that does seem missing is the public.

The population is said to be about 1 million, yet the construction and infrastructure could easily hold twice that number; empty shops and apartments abound, and while it is refreshing to have some personal space in a major city, one wonders how another million or so people will be drawn to live their lives in this mystical monument of the Kazakh Steppes.