Travelling in Kosovo is an odd experience, and perhaps for this reason, it was the ideal location to finish my two-week tour of the West Balkans.

“Countries”, are interesting phenomena. While we feel comfortable referring to France, Bolivia or Canada as “Countries”, and feel pretty sure about what we mean, there are other territorial definitions that are far less inflexible or rational. Lines drawn on maps by bewhiskered Victorian gentlemen cause problems to this day throughout Africa, and other parts of the world are deviled by similar historical arrogances. The West Balkans are a contemporary exercise in political cartography, and have willingly overlooked ancient historical grievances in the name of accord. Accord, however, does not inevitably lead to harmony.

Kosovo is an ancient land. In 1389 the Serbian rulers were defeated by the Turks and finally overran in 1459 battles that were triggers for the mass migrations that have blighted the region. Thousands of Serbs flowing north, Turks and Albanians flowing south and east, centuries of conflict; famines and plagues that sent large populations scurrying for security and leaving tens of thousands dead. Kosovo, so central to the Serbian and thus the Balkan story, is an important place to understand.

Myth-makers and other historians have written and discussed these ancient events from every point of the compass; it is a region that seems to have yet to find its secure spiritual or civic home. Neither dream of Greater Serbia or Greater Albania has ever emerged fully as a dominant cultural ambit to which its people could belong. So, even in the 21st century, Kosovans can do little more than try to build the vital political institutions that underpin any country, and to develop an economy that will keep the people together.

For travelers to the region, it is economic development that is impossible to ignore. Driving through Kosovo’s countryside is quite gorgeous. Light shines on the endless ridges of the southern hills and glints off the minaret spires and proud roofs of orthodox churches; it is a captivating landscape and redolent of ages past and the passions of history. It is, however, the roadside economy that is so absorbing. 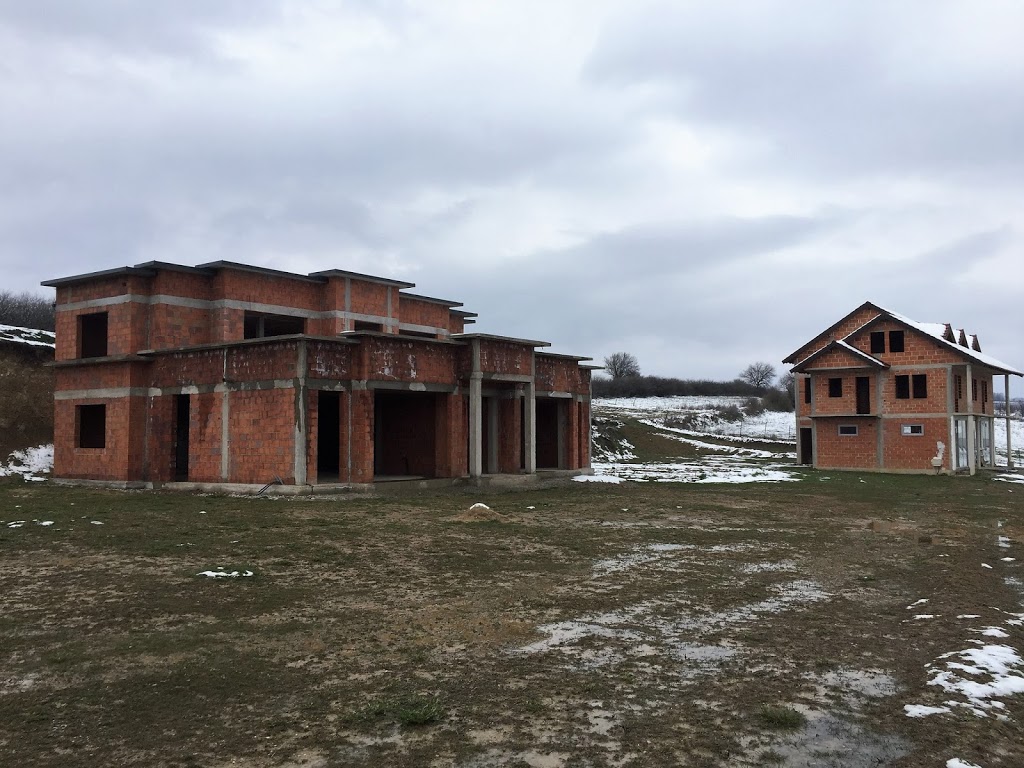 Gambling, weddings, construction and eating seem to be the four pillars of the Kosovan economy. Casinos are everywhere; some offering the hope of a better life, formerly the exclusive domain of religion but now a touch more secular, and some offering the wherewithal to wash the endless supply of Funny Money that sluices through this part of the world, attached to the drugs and weaponry that are another major economic driver in these parts.

Buildings, some half-finished and abandoned, some shiny, bright and purposeless, and some with an apparent use spring up wildly. Emigrés seeking to show their wealth and build a monument in their home villages construct glistening wedding centres, great structures of glass and glitz at the edge of the town waiting for a periodic coupling of villagers to bring it to life. Everywhere, breeze blocks, reinforcing rods and bewilderment; there must be a logic, but in the manner of a wild and natural forest, buildings sprout up with little apparent reference to any other. It offers a mildly eccentric picture, one that might have a pattern, but one that is not immediately obvious.

The towns bustle; there is activity and commerce, the buying and selling of buttons, flags, mattresses, bricks, insulation and roof tiles evident by the huge pile of inventory spilling out onto the streets. Nothing looks finished and somehow everything looks slightly unfamiliar and out of place. The destruction of war, ethnic cleansing and centuries of conflict has left little physical signs of historical value, and the countryside, as pretty as it is, is covered with this new-growth of ragged housing.

It is an important stop for any visitor to the region, and I decided to base in Prizren, some sixty miles south of the capital, Pristina, and close to both the Albanian and Macedonian borders. It was, in some ways, an inspired choice. The town is certainly pivotal, and a centre for the Albanian culture of Kosovo, and as a border region, a town that developed a unique cultural perspective, sandwiched as it was between the Serbian-dominated Yugoslavia and the Stalinist regime of Enver Hoxha in Albania. 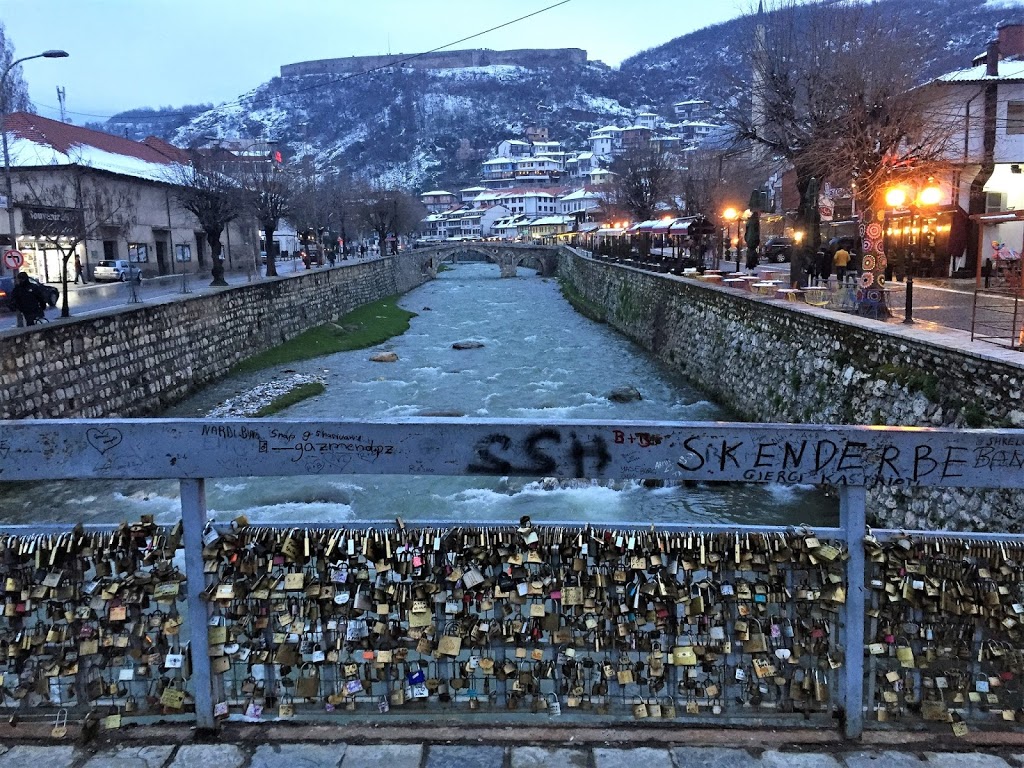 Prizren is an attractive town in a two-night-stay sort of way. It is a Muslim city of Albanians, Roma, Bosniaks (ethnically Muslim Bosnians) and Turks; the flag of the Turkish government is evident on reconstructed buildings and new projects. The bustle of completion is everywhere, but in the evening, as the lights come on in the bars, cafes and restaurants in the Old City, one has a fleeting glimpse of a cosmopolitan community. It is attractive in a Restored-And-Shiny way, and a pleasant enough place to wander, but there is little enough to keep a visitor’s attention for long.

The attraction of Kosovo is to drive, explore and think. In villages and through the countryside Albanian and Serbian flags fly defiantly or hopefully, and from time to time one sees a Kosovan Flag fluttering optimistically; it is a muddled place. For hikers, there are spectacular trails in the mountains, mountains whose very ruggedness that now attracts visitors have caused such a fractured past to endure through the centuries.

Yet, as everywhere else I have visitors in the region, there are people, friendly, warm and welcoming people.

People who can only wonder how the lottery of life has left their small region so bereft of opportunity. It is a region of extreme beauty, deep cultural roots and strong family and regional bonds. It is a region of some strategic importance, and, curiously, a region that still reveals “community” is its strongest sense. A sense of common purpose that has been lost in so many rapid and binary western societies.

Kosovo is a good place to visit; if one of the purposes of tourism is to understand and be understood, visiting fractured yet hopeful countries is important. When one can add the people, scenery, history and fascination of Kosovo, then it rises fast in any list of countries to visit.

Kosovo is hopeful; it needs help and one can only wish that its proud and generous emigrés may one day decide to give their village a new school hall instead of another shiny House of Weddings.