A short trip to Hudson Bay

Naujaat is a small community in Nunavut, lying on the shore of Repulse Bay, and sitting astride the Arctic Circle

In the past twelve months, I have been all over Canada, from Newfoundland to Vancouver, to Azerbaijan, Thailand, France (of course), the UK, Georgia and Australia, and now to Naujaat, (formerly Repulse Bay ) on the Arctic Circle.

For reasons that remain fuzzy, I purchased a hotel in Churchill last year, and my daughter and a friend have been managing it with great competence and enthusiasm this year. A week or so ago, I went up for a few days to see how all was getting on, and to reacquaint myself with several of our long-time suppliers and partners in Churchill.

It is a lovely place; nestled on the shores of Hudson Bay, it makes its living form a panoply of activities including tourism. The summer is astonishing; the colour of the tundra, access to a eighteenth century British fort, the thousands of Beluga whales in the river and the opportunity to enjoy the bright days with some fascinating folks.

So up I went, and had a terrific time. I even went on the best tour program that I have ever been on; it is a one-hour ride in a 1942 Turbo Beaver aircraft, overflying the Prince of Wales Fort, the belugas in the river and then, some fifteen miles from town, Cape Churchill with at least twenty, healthy-looking polar bears.

The flight is brilliant, and to be recommended.

Having gone north, we decided to continue, and flew another 600 miles to Repulse Bay, a small Inuit community that straddles the Arctic Circle. Here, we knew that we were far, far north; even in early August the sun never really dimmed, and the community was alive with the signs of hunting and summer activity.

Repulse Bay is home to a huge population of Narwhal, in addition to Bowhead and Killer Whales; Belugas venture this far north, and the seal population is massive as well. It did make me smile to wonder, if it were possible to briefly drain the bay, just how many sea mammals would be lying on the bottom.

The Department of Fisheries and Oceans do know this, of course, and estimate the local population of Narwhal to be in the region of 30,000, and they allow the community to take 72 for their own consumption. We went out simply to watch, and the sight of three narwhal leaping from the water with their long, ivory tusks flashing in the sunshine is truly extraordinary.

We visited an old Thule settlement, saw a myriad of tundra flowers, and everywhere we wandered in the village we were stopped by folks saying Hi, and wanting to know where we came from. Repulse Bay is a lovely place, and perhaps the most welcoming northern settlement that I have visited in a long time.

They are obviously friendly to each other as well, as the evidential hickies were everywhere. I had, perhaps naively, thought that love-bites, as we knew them in London in the seventies, had disappeared as a teenage fashion accessory and social statement some decades ago.

It is different in the north. Folks drive ATVs and some trucks, clothing is different with many of the very many babies carried in highly practical shoulder pockets in coats.

Freight is different; I was a touch surprised to see a shipment of Narwhal blubber being air-freighted south to Rankin Inlet to satisfy someone’s epicurean yearnings.

Inbound goods seemed dominated by potato chips and soda cans. I was utterly flabbergasted to read that annually, the population of about 40,000 folks in Nunavut import 10,000,000 cans of soda. Yes, ten million cans of soda, each costing an eye-watering $3.69 in the local co-op.

This, of course, represents an average of 250 cans per man, woman and child each year, and goes a long way to explain the almost complete absence of teeth.

It is an odd diet; on the one hand, the majority of their protein is hunted and as fresh a meat-supply as one could want; narwhales, seals, caribou and fish with the occasional fifty-two ton Bowhead whale to split among the community; their starch seems to come from potato chips and it all washed down with coke and ginger ale.

We also saw some packets of frozen fish in the store’s refrigerator, which did seem a touch odd!

It is a destination, too , for those interested in Inuit carving. I love the delicate work, carved from the fluid coloured stone of the region, and have collected some fine pieces over the years.

Repulse Bay had a lovely collection for sale, and wanting no more than to do my bit for the local economy, I did buy a couple. 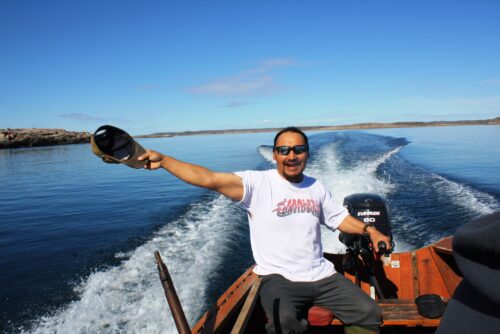 Naujaat – Billy on Repulse BayAll in all I loved Repulse, and am looking forward to coming back in the winter on our new snowmobile safari; we will travel with Inuit guides between Repulse Bay and the community of Kugaaruk, some 150 miles north, in the true High Arctic.