Bosnia’s Mostar: a most curious place

Travelling in Bosnia and Hercegovina (B&H) is interesting, and the ancient city of Mostar is a particular treat.

Suffice it to say, that of the many conundrums that combine to make the former Yugoslavia, B&H is the most tongue twisting. It is a fascinating place, a country of wars, peace, religions, exodus, mountains, genocide and more. It even has a football team (The Dragons), who are reasonable, and often qualify for European (and World) tournaments.

Bosnia also has people, 3.5 million of them, although the loss of over 150,000 young and educated Bosnians over the past decade or so has left an indelible mark on the demography country. It is a country accustomed to change; it has swung between the Ottomans and Hapsburgs, the Yugoslavs (both the Kingdom and the Socialist Republic) and ceded to the Nazis during the second World War, it saw intensive resistance action as the birthplace of Joseph Tito’s partisans.

And then, of course, came the civil war in the 1990s; an inevitable conclusion, perhaps, of centuries of unfinished ethnic discord and the separation from the Yugoslav Federation of Slovenia and Croatia and the subsequent power realignment. It was a war of extreme brutality, and the cessation of hostilities and the ensuing twenty years of peace has allowed tensions to simmer down and the country re-establish a sense of normalcy.

Or as normal as Bosnia can be. It is a fine place for visitors. Its people are welcoming and warm, the countryside spectacular, its history deep and evident and the undying culture of hospitality that marks the Balkan countries is unmistakable. 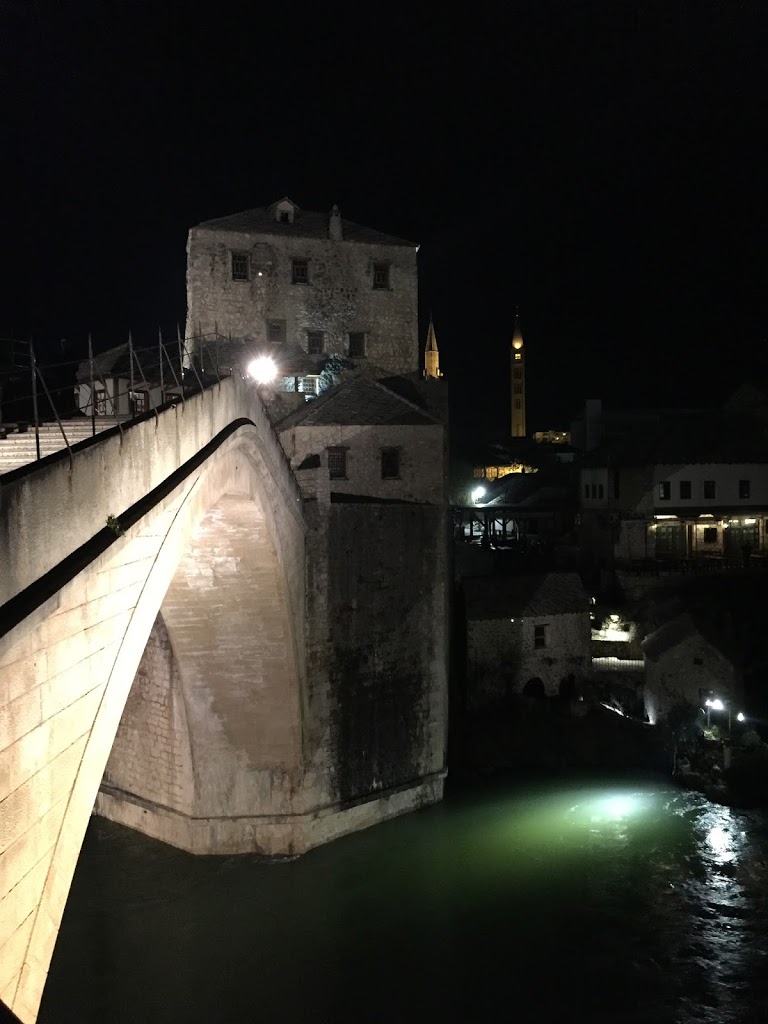 Mostar, a jewel of the country, is a larger city that I had thought. Knowing only of its Old City, and iconic bridge, and having been too lazy to look anything up in a book before I arrived, I became hopelessly lost in the city’s eccentric one-way system that today is punctuated by dozens of major road construction sites and an almost complete lack of road signs.

I had a map, but being of Central Europe it was too small to be of any further use than simply reaching the city; I had some directions to the hotel I was using that failed to take the road construction into account and finding myself passing the same statue three times, I decided to do the unmanly and ask for directions.

It is a good thing that I did, because I was miles away from the hotel, and suitably redirected, I made it on the third pass.

It was at dinner that night (Podrum’s Restaurant in the Old Town) that I first talked about B&H with a local. Seno Hadžiosmaxioxićis a delightful and interesting man. He has lived in the UK, Germany and Portugal and now returned to the family business and Mostar mainly because of the exodus of young people, including his son. “How can we rebuild a country without our young people?”, he asked, only partly rhetorically. “They are all going.”

The lack of an agreement with the EU, Canada or the USA for migrants did not seem to be a problem to emigration, and indeed, not for the first time, I wondered about the immigration policies of the wealthy countries that seemed to both encourage bright, young migrants, and simultaneously stymie their own efforts at economic development in those same countries.

I spoke later to a young man who worked in a small bar. I asked why he was still there when so many of his friends had gone, and he said that he was only waiting until he had finished his school year before heading off. I asked where the most popular country was for his generation to go to, and was only mildly surprised when he said “Ireland; now England has left the EU, there is no point is going there.”

And so, as I wandered through this old and serially abused town, I admired the reconstruction, wondered what the original Ottoman builders would have thought of so many restaurants and shops competing to sell fridge magnets and copper teapots, and decided that I liked the pictures much more than the reality, and decided to leave early. 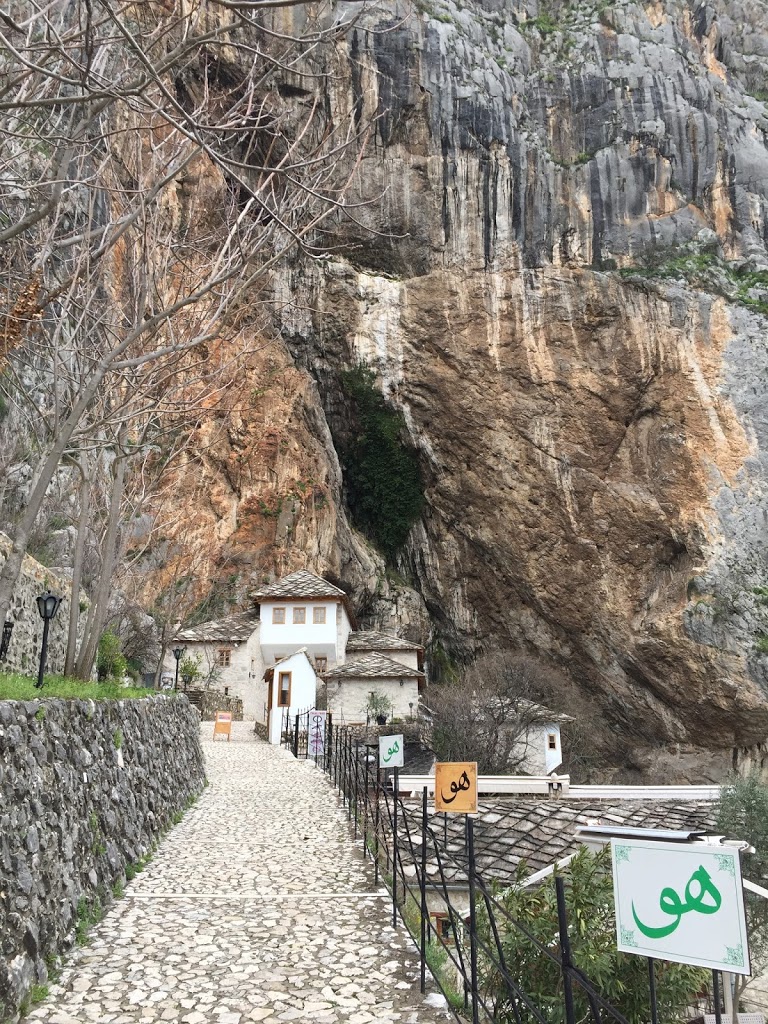 Seno had advised that I visit two sites before heading to Sarajevo. The first, Blagaj was the home of sect of whirling dervishes, a group that has always puzzled me.

Both their obscure form of sermon, splendidly called The Tasawwuf, and their almost maniacal, repetitive whirls.

Many years ago I witnessed Dervishes whirling in Istanbul, and lost for a moment in tangential thought, found myself assigning day jobs to these rotating believers.

Dervishes come from all walks of life, of course, as do adherents of all faiths, but “why the whirl?”, I wondered. “Are you still dizzy when you go to the office or drive your bus in the morning?”. Here, they practice three times each week.

This is, of course, only an aside to the very beautiful and spiritually important Dervish House at Blagaj. It is stunning, and reflects the overriding belief that the natural environment within which the house is built is an integral part of the relationship with God, and this house, the Tekija, is a wonderful example. Nestled at the foot of an imposing cliff of quite magical geologic patterns, it lies by a river flow that rushes from under the cliff itself. It is quite beautiful, and quite serene. The Dervishes have a very fine place of worship. 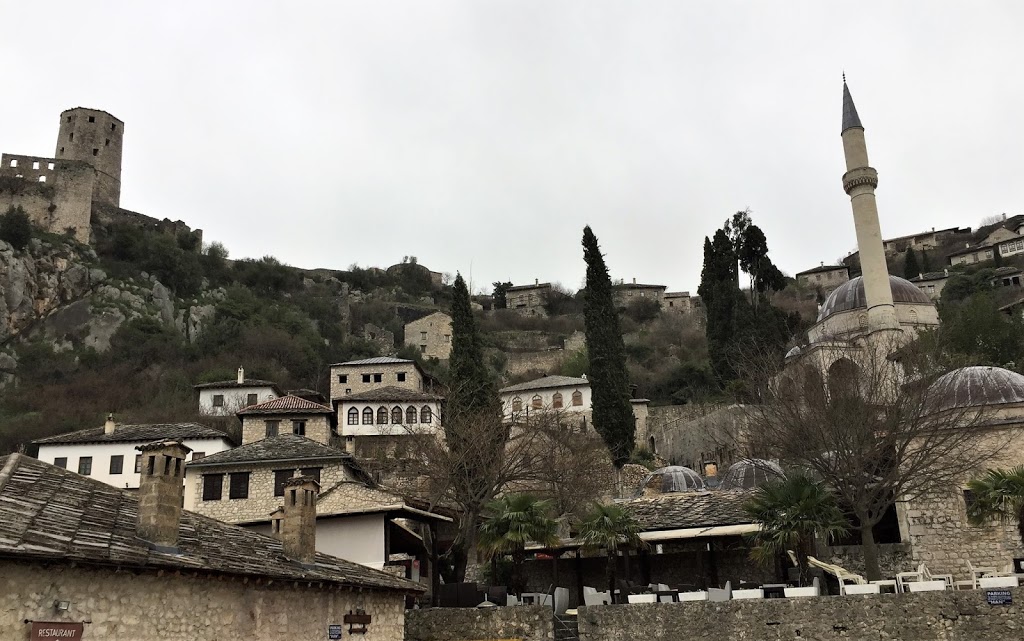 Počitelj as seen from the road

Twenty kilometers further along, lies the Ottoman town of Počitelj. It actually comes as a bit of a surprise after the usual roadside scruff; a partly built house here, a small tire dump there, a concrete bus-stop here and a cluster of peculiar shops there. The road has broadened out as the mountainous terrain heads toward the Adriatic, and the hills, while still commanding, lie a little farther from the road. Yet coming around a corner, one is immediately struck by this quaint, ancient and entirely improbable community lying by the side of the road. Seemingly untouched by the centuries.

Dating back to the 15th century, it was a fortified town that housed a Hungarian garrison between 1463 and 1471. Following a brief siege, the Ottomans captuPočiteljred , and from then on it lost its strategic significance and its moment in the sun had set. It has remained dozy for five hundred years, pausing periodically to mend a step, change a light bulb and slowly toddle its way through the centuries.

The slow passage of time, or more precisely the lack of any apparent need for it to hustle, has left the town as a marvellous and most picturesque example of the Ottoman Empire. I am assuming that it is picturesque, because the sleet that was drifting down on the day that I visited thwarted my photographic ambitions somewhat.

It is quite lovely. For the fit and able, the fortress lies a hundred metres or so above the town; for others, simply wandering through the ancient streets gives a distinct sensation of time travel. Perhaps the grey weather helped; the stairways were empty and uneven, the roofs bare and uneven, the mosques spiny and confident, and the entire blend of life and spirituality was completely absorbing.

And so, after a coffee, I turned my car around from the illegal position in which I had left it, and drove back to Sarajevo, the capital of this enigmatic country, and the next piece of the puzzle of The Western Balkans.