The Canadian Prairies; Tough driving for 3,000 km on the Yellowhead Highway

The Yellowhead Highway, from Winnipeg across the Prairies, and eventually north to the NWT, is a long, long drive.

I have, in accordance with the Way of Life, been wandering this summer, and notably through Canada. Having left Newfoundland and its unusual dancing, whizzed around the Cabot Trail, and I must say left that iconic drive completely underwhelmed, it was time to head west, and drive to Yellowknife in the Northwest Territories.

Now the drive from Winnipeg to Yellowknife, some 3,000 kms of deeply predictably highway, can appear to be monotonous. This would be and unfortunate and slightly unkind observation as my friend, the CBC notable Laurie Hoogstraten pointed out. “Meditative is the word you are looking for, Max”, she intoned, “not dull at all”.

And once free, and ready to move on, we reached Saskatoon, the slightly quirky and rather pretty city that houses the University of Saskatchewan and straddles the South Saskatchewan River in the centre of the prairie.

It is a welcome break, although it was raining so much its charms were mostly washed away, but there are several very good restaurants in town, and the opportunity was taken to celebrate my cousin Jude’s Marker Birthday in some style.

She, my cousin, was it must be said, quite overwhelmed with the available space of the prairie, the relative emptiness of the roads, the sheer quantity of farmland, the mysterious stick-insect-machines that seemed to be so popular.

The proliferation of pick-up trucks, the rather unappealing urban-planning represented to us as we drove, grain elevators, and Corner Gas (to which we inevitably introduced her).

And so the first day passed; the second (1,074kms to Peace River) was not notably different other than the irritating road works, punctuating the meditation, presented by Edmonton clearly trying to sharpen itself up.

We turned north; the first real junction of the journey and a good opportunity to test the car’s steering mechanism, and slowly but surely, in the sort of progression that is only visible to those in a car, or perhaps a train, the landscape changed, and on the third day, (945kms – Peace River to Fort Providence) we passed the border into the Northwest Territories.

As we burst across the 60th parallel, so did the sunshine and our introduction to the north was complete as the park rangers immediately offered us a cup of coffee.

Coffee is the fuel of the north; barely an hour goes by without someone “putting on another pot”, “topping one up”, “reaching for an empty cup” and bemoaning the black liquid’s viscosity. “A bit thick, this coffee” is a common refrain, but there it is, the primary food group of Canada’s territories.

Fort Providence, a community that lies along the Mighty Mackenzie, and until recently was where all land traffic in the summer had to cross by ferry, is compact, slightly buggy, friendly and a fine place to stay overnight before the final 350kms on to Yellowknife.

I am, as many well know, an immigrant from the United Kingdom; London is my Home Town and the transition from Britain to Canada interesting.

There are, it seems two English people living in Fort Prov (as it is so charmingly diminutised); appearing in the community one day, and declaring that it offered all that was unavailable in Great Britain, they moved. I didn’t meet them, but would love to find out more. Perhaps it was the curious drinking requirements: 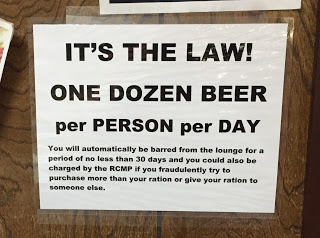 Having been split into two parts in 1999, the eastern Arctic became the Nunavut Territory.

Presumably tired of the etymological disturbances of the past centuries, and being underwhelmed by the new names offered as an alternative (“Denedeh”, an Athabaskan word meaning “Our Land” was a strong contender, as was the choice to rename the territory “Bob” according to polls at the time), the title of The Northwest Territories stuck.

And the NWT it remains. A very fine place, and only 3,020 kms from my house in Winnipeg.