Now don’t get me wrong; the hours pass on board The MS Griefswald at precisely the same rate as they do elsewhere, and I don’t begrudge the UKR Ferry Company the additional eighty or so hours of my life that I have given them, as the experience has been interesting; if a touch slow.

Being (at least) eighty hours late is an odd concept for those of us used to flying. Once you get on a plane and it has departed, it cannot stay aloft and circling indefinitely; it will land one way or another. Ships are not like that, although our idling in the Eastern Black Sea will be curtailed by a shortage.

Not of fuel, but food. Apparently, there is about another two-day supply on board. 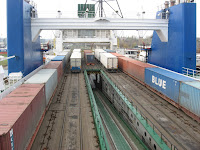 This is mildly ironic given that our truck-cargo comprises about 50% perishable products destined to Caucasian markets. There are trucks filled to the gunwales with oranges, fish, chocolate and other one-way goods. Twice each day, the drivers are permitted to run their coolers for thirty minutes, and there is much relief that this is not the midsummer.

“Open the trucks and let’s eat the food”, I say; I don’t really want to go back to Odessa.

I have given up hope of getting to Baku, the original intention of the trip, because the timing just won’t work. I will get to Tbilisi tomorrow night (heard that before?) at the earliest, and while I could fly on Tuesday, it would only give me one day there. Not enough, and anyway, I like Tbilisi; I might still have to do if Turkish Airlines won’t change my return journey! 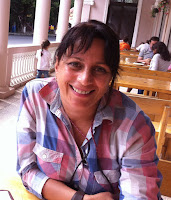 Ia, whose advice is always goodOne advantage of being on board for so long is that I have had time to meet some interesting people. And, as my friend Ia said in an email from Tbilisi when I must have sounded a bit sorry for myself, “Try to look a all things from different view: 1. that was your choice, 2. Potentially you knew that this way of travel will not work properly, 3. Anyway you are on a good mood, 4. Hopefully not alone – this is very important, 5. not hungry, 6. not cold, 7. not under bombing risk” And she is quite correct, of course; particularly about the bombing.

It reminded me that last time I was in Georgia I left about a week before the Russian arrived with their characteristically aggressive entree. I had quite forgotten the terror that Georgians felt during the invasion, and her reference was quite appropriate.

And so, in a quest not to be alone, I have made two new friends from Tbilisi. At the minimum, they will assist in finding the right bus because they will be on it, but it has been most interesting to listen to their insights into this remarkable region.

Archie (my spelling) is a vet, made bankrupt by the Russian invasion and its consequential economic tsunami. On his way back up again, he has just been on a two-week trip to the Ukraine to look at urban policies concerning stray animals. It is really good to realise that even among the difficult and often inexplicable commercial life in the region that there are people who take these important yet ostensibly minor issues seriously.

It is an interesting feature of small and necessarily defensive and self-promoting countries that history takes on a completely different scale. Incidents spoken of as raw and personal grievances turn out to have happened hundreds of years ago. The Viking indignities, only recently forgiven by the North Atlantic Islanders; William of Orange’s insensitivities in Ireland; and here, the great deeds of King David the Builder shine contemporarily in people’s eyes.

This is a very good thing in many ways; we all know that those who forget history are condemned to repeat it. Although history seems to continuously repeat itself in the fascinating cultural that is the North and South Caucuses, I don’t think it is. I just don’t think it has finished yet.

Which is why a trip to Baku that has turned into three days in Odessa and five days on an East German bathtub has been wonderful; being so close to a culture and economy that is so far from my normal life is endlessly fascinating. Although I don’t pretend to understand much of what is going on, other than a shrewd guess that so many truck drivers will be whining about the cost of fuel and taxes, I have been offered a flake of an environment so foreign to my own.

And it is a true privilege.